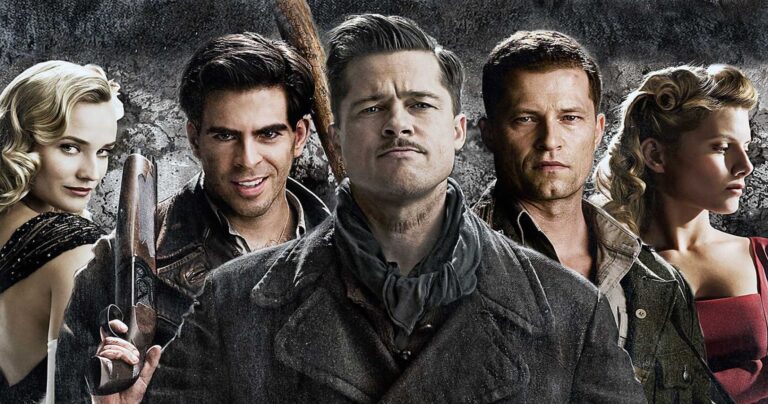 Quentin Tarantino’s revisionist World War II revenge fantasy Inglourious Basterds makes the leap to 4K Ultra HD with a new home video release from Universal. Boasting a cast that includes Brad Pitt, Melanie Laurent, Christoph Waltz and Michael Fassbender, the film — about a grizzled squad of American soldiers feared by the enemy for their savage tactics and predilection for collecting scalps from their fallen foes — remains every bit as entertaining and hilarious as when it first hit theater screens more than a decade ago.

As for the release itself, it’s something of a mixed bag. The addition of HDR allows for brighter whites, inkier blacks and more color depth — the reds, in particular, are noticeably bolder than the previous Blu-ray disc, which is a boon for a film containing so much blood. But the decision to utilize the existing 2K digital intermediate from the Blu-ray release and upscale it, rather than doing a new 4K scan of the negative, feels like a miscalculation. The original Inglourious Basterds Blu-ray looked great, but its flaws are seemingly accentuated: pixellation and digital noise are more apparent here, and overall the picture feels lacking in some of the finer details that a new scan might have drawn out.

Consumers hoping for a new 7.1 or Dolby Atmos audio track might be disappointed to learn the 4K UHD release contains the same 5.1 DTS-HD Master Audio as the previous Blu-ray, but it’s worth pointing out that the original track was close to reference quality, and still sounds amazing here. Gunfire and explosions — of which there are plenty — pack plenty of punch, but dialogue remains crisp even as the action sequences give your surround speakers a workout.

The extras are also recycled from the Blu-ray release, including extended and alternate versions of certain scenes, a collection of trailers, and perhaps most interesting, a 30-minute roundtable discussion with Tarantino, Pitt and film critic Elvis Mitchell. The conversation doesn’t make up for the lack of a feature-length commentary, but it’s an interesting and enlightening chat nonetheless.

If Inglourious Basterds is missing from your home video collection, then it’s easy to recommend this 4K UHD release, especially with the included Blu-ray disc and the digital code. It’s still among Tarantino’s most entertaining efforts, but if you already own the previous release, the minor improvements to video quality along with the recycled audio track and supplements make this “upgrade” a bit difficult to justify.

Blu-Ray Review: ‘Once Upon a Time… in Hollywood’

Movie Review: ‘Once Upon a Time… in Hollywood’