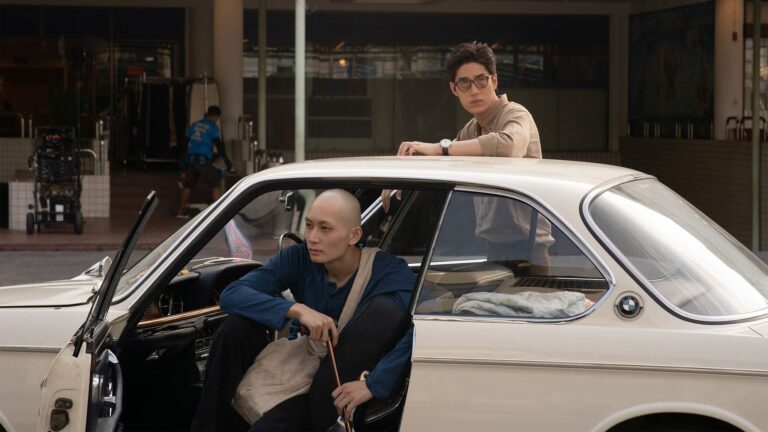 The communal experience has always felt like one of the most vital ingredients of film festivals: sitting in a room full of strangers, waiting to embark together on a journey that hasn’t been preceded by trailers, an extensive marketing campaign, or a series of earlier installments. But thanks to the ongoing COVID-19 pandemic, the 2021 Sundance Film Festival has gone digital, and the outbursts of laughter, shocked gasps and rapturous applause that have always felt baked into the festival’s DNA will be missing.

That said, One for the Road proves that good filmmaking can be just as powerful in a smaller, more intimate setting (like one’s living room). Director Baz Poonpiriya’s elegant story about two estranged friends rekindling their bond in the wake of a terminal diagnosis is deeply affecting, and packs some serious emotional punch.

When Manhattan bartender Boss (Tor Thanapob) finds his latest one-night stand interrupted by a phone call from former roommate Aood (Ice Natara), his irritation quickly gives way to disbelief as his old pal drops a bombshell: like his father before him, Aood has leukemia, and time is running short. “Can you come back to Thailand?” he pleads, and Boss is on the next flight out, arriving to find Aood thin and frail, but steadfastly resolute in his desire to complete a list of tasks while he’s still able. Boss assumes the bucket list will include things like bungee-jumping, skydiving or having a threesome — “not my thing,” Aood says with a roll of his eyes.

Instead, Aood wants to return certain sentimental items to three of his ex-girlfriends, a notion that Boss, as the consummate ladies’ man, can’t seem to wrap his head around. “I know how sad it is for the ones left behind,” Aood explains, and Boss finally acquiesces to shepherd his friend across the country on one final road trip. Each of the reunions — with dance instructor Alice (Ploi Horwang), film actress Noona (Aokbab Chutimon) and photographer Roong (Noon Siraphun) — is juxtaposed with flashbacks that not only highlight the tumultuous nature of each romance, but also sketch in the details of Boss and Aood’s friendship.

Poonpiriya composes some truly beautiful moments here, including a stunning slow-motion shot of Roong against a backdrop of New Year’s Eve fireworks over the Manhattan skyline, and a tender sequence set to Elton John’s “Tiny Dancer” that might have felt a bit too on the nose in the hands of someone less capable. But lest One for the Road get too mired in melancholy, Poonpiriya knows just when to punctuate Boss and Aood’s journey with a bit of levity, peppering in amusing moments and leveraging a brilliant and completely unexpected John Woo reference to great effect.

The story of Aood’s quest for closure with his former lovers would’ve been enough to sustain the film, but Poonpiriya has something a bit more ambitious up his sleeve during One for the Road‘s second half. Aood’s farewell gift to Boss leads to an extended flashback, an origin story of the latter’s journey to New York City and his first meeting with Aood. Startling revelations abound about who Boss and Aood were at the time, and how decisions they both made informed the people they would eventually become.

It’s truly remarkable storytelling that completely reshapes the narrative, forcing us to reexamine our feelings and confront some uncomfortable truths about both characters. Poonpiriya explores the notion that many of us are capable of making choices that can be vile or virtuous, but those choices don’t necessarily constitute the full measure of who we are — humans are messy, complicated creatures, and the path we choose isn’t always the path we’re meant to walk. One for the Road is clearly a deeply personal film for Poonpiriya, full of raw emotion and poignant reflection, and a great opening night selection for the 2021 Sundance Film Festival.