REVIEW: Panic! at the Disco thrills sold out crowd at Honda Center 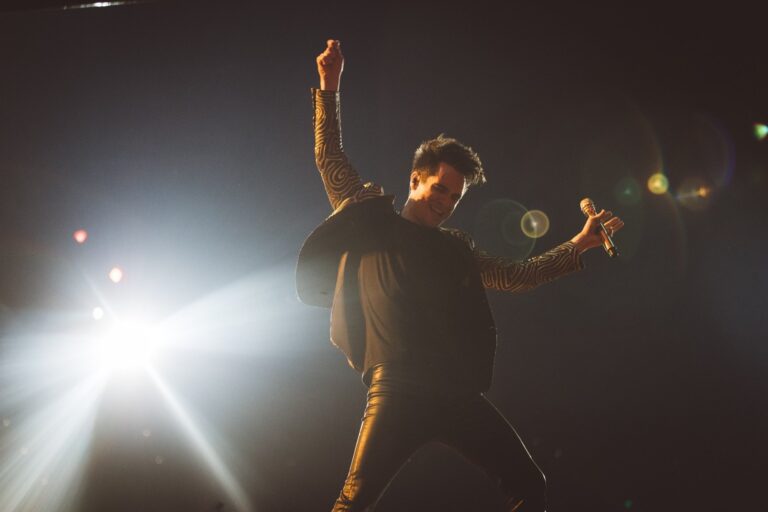 ANAHEIM — Couples who elected to spend Valentine’s Day at the Honda Center with Panic! at the Disco were treated to an extravagant, high-energy arena rock show, complete with towering video screens, pyrotechnics, and a piano that levitated and floated across the entire length of the venue floor.

As the final leg of the band’s “Pray for the Wicked” tour wraps up on the west coast next week, frontman Brendon Urie showed no signs of fatigue, rocketing out of the stage from a trapdoor and launching into 2018 single “(Fuck A) Silver Lining.” The opening guitar riff from “Don’t Threaten Me With a Good Time” elicited a roar of approval from the sold-out crowd as the band segued into the beloved radio hit, following up with another live favorite, “Ready to Go (Get Me Out of My Mind).”

The remaining setlist was heavily influenced by the band’s last two albums, with a whopping nine selections from Pray for the Wicked, and seven cuts from Death of a Bachelor. The title track from the latter found Urie wandering through the crowd, greeting audience members with a smile and taking selfies while crooning the lyrics, in what fans have affectionately dubbed “the death walk.” The song’s completion found Urie at the back of the arena floor, seated at a gleaming white piano that rose, suspended on wires, and conveyed him back to the stage as he sailed over the heads of delighted concertgoers.

Throughout the night, streamers and confetti were launched into the air, with fans creating a rainbow during “Girls/Girls/Boys” by shining their cell phone lights through multi-colored paper hearts. Wrapped in a Pride flag that someone near the front row had thrown onstage, Urie welcomed opening act Betty Who to perform the song with him, and fans were quick to supply her with a flag of her own. Beautiful moments of inclusivity like this are one of the many reasons Panic! have garnered such a devout following, enabling them to sell out huge venues on a consistent basis.

The two-hour, 28-song set featured a handful of covers, including a Bonnie Raitt song that Urie dedicated to his mother, and Queen’s “Bohemian Rhapsody,” which has long been a staple of Panic! at the Disco’s live shows. Urie capped off the main set with “Emperor’s New Clothes” before disappearing into the shadows, and when he returned for the band’s encore, rising once again from the trapdoor he’d used to kick off the show, he seemed more relaxed, sauntering to the front of the stage while drinking from a tallboy of Coors Light.

Ever the gracious performer, Urie thanked the crowd for supporting Panic! over the years, acknowledging he was only onstage because “you guys let me live my dream.” With nearly 5 million records sold worldwide and a fanbase always in demand for new music, it’s safe to say that Urie’s dream will continue to play out for years to come.

Setlist
(Fuck A) Silver Lining
Don’t Threaten Me With a Good Time
Ready to Go (Get Me Out of My Mind)
Hey Look Ma, I Made It
LA Devotee
Hallelujah
Crazy=Genius
The Ballad of Mona Lisa
Nine in the Afternoon
One of the Drunks
Casual Affair
Vegas Lights
Dancing’s Not a Crime
This Is Gospel
Death of a Bachelor
I Can’t Make You Love Me (Bonnie Raitt cover)
Dying in LA
The Greatest Show (Pasek and Paul cover)
Girls/Girls/Boys
King of the Clouds
High Hopes
Miss Jackson
Roaring 20s
Bohemian Rhapsody (Queen cover)
Emperor’s New Clothes