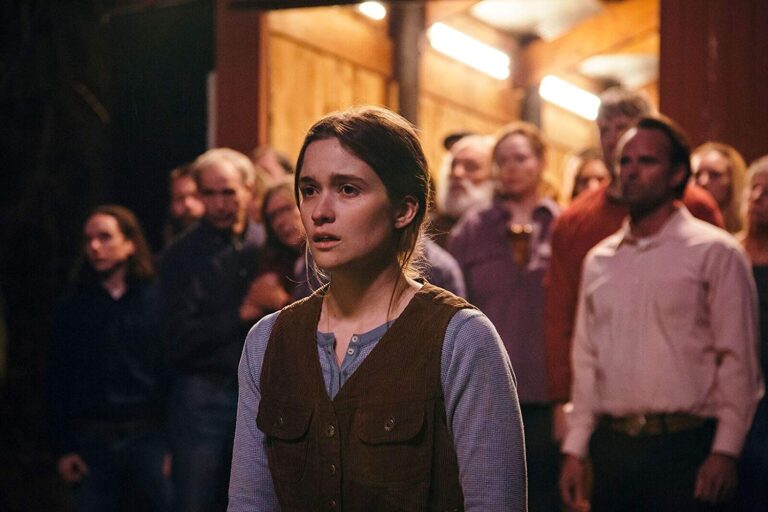 My final day at the 2019 Sundance Film Festival was scheduled to be split between two movies at The Ray Theater in Park City, then a short drive up into the mountains to catch the final two films at the Sundance Resort.  The previous days had provided laughs, suspense, and deep thoughts, but nothing in the realm of disturbing. All four outings scheduled for my last day would rectify that, in spades.

The descent started with Them That Follow, a dark, layered, and unflinching look at a snake handling community in the deep Appalachian mountains, where the pastor’s daughter has a secret that carries major consequences for the entire congregation. Walter Goggins heads a strong ensemble cast that includes Olivia Colman, Thomas Mann, Kaitlyn Dever and Jim Gaffigan, but it’s Alice Englert’s performance as Mara that provides the core of the story. With lots of characters and a running time of only 98 minutes, one might be concerned that character development could be lacking, but that certainly wasn’t that case — in fact it might be one of the film’s strengths. Each of the characters are given arcs that are essential to the story, while also providing each a chance to breathe. This story pushes uncomfortable boundaries as it relates to faith and devotion, and the atmospheric intensity never lets up once the opening credits begin.

Sometimes a director pushes the boundaries of “decent” or “tasteful” to put the viewer into the mindset of a character. The Nightingale is one of those films where writer/director Jennifer Kent forces you to bear witness to a horrific rape/murder scene involving convict Clara (Aisling Franciosi), her husband, and their infant child. Set in the 1800’s Tasmanian wilderness, Clara follows the British officers responsible with the help of Aboriginal tracker Billy (Baykali Ganambarr) in search of revenge. As the story moves along, we discover that Billy, too, is the survivor of a different kind of rape perpetrated by the British. One of the film’s strengths is how the two very different victims begin to understand one another on their journey to find that they may not be all that different.  Separating this one from your usual rape-revenge story is the way we see that sometimes what we desire to do and what we are willing to do for revenge may not be exactly what we thought. There are some truly beautiful scenes surrounding the darkness of this story, but at just over two hours if felt like there could have been some condensing. Regardless, The Nightingale will stick with you long after viewing it.

One of my most anticipated films at the festival, Extremely Wicked, Shockingly Evil, and Vile, turned out to be everything I was hoping it would be. The story of Ted Bundy (Zac Efron) told after he was arrested focuses less on Bundy’s crimes, and is told more from the perspective of girlfriend Liz Kloepfer (Lily Collins). This fresh take on the serial killer lets us see the psychological damage his actions had on loved ones. The story works, as director Joe Berlinger focuses mostly on Liz and how she struggles with the guilt and burden of being Ted’s girlfriend. We’re never shown any of his murders, only his trials and adamant protestations of innocence, which allows Efron to showcase the charisma and charm Bundy used to mask his inner monster.

The last film of my 2019 adventure would turn out to be nothing quite like my expectations. Velvet Buzzsaw boasts an absolute stellar cast with Jake Gyllenhaal, Rene Russo, Toni Collette and John Malkovich, just to name a few.  What begins as a satirical look at high end art dealings quickly evolves into a pseudo-supernatural horror story. Almost without warning, you go from laughing at the absurd idiosyncrasies of the characters to wondering just who will be the next to go and just how horrific will it be. The acting is top notch and the story never gets bogged down by the genre shift, but it does leave viewers with a lot more questions than answers. Gyllenhaal and Zawe Ashton have great chemistry together and provide enough to make me want to see this unique film again, if for no other reason than to see what clues I may have missed the first time through.

Just like that, my tour de force of eleven films in three days came to an end, as did my time in beautiful snowy Park City. With such a diverse and strong slate of films, picking a top five list was very challenging. But for Sundance 2019, these are the selections that left the strongest impressions: