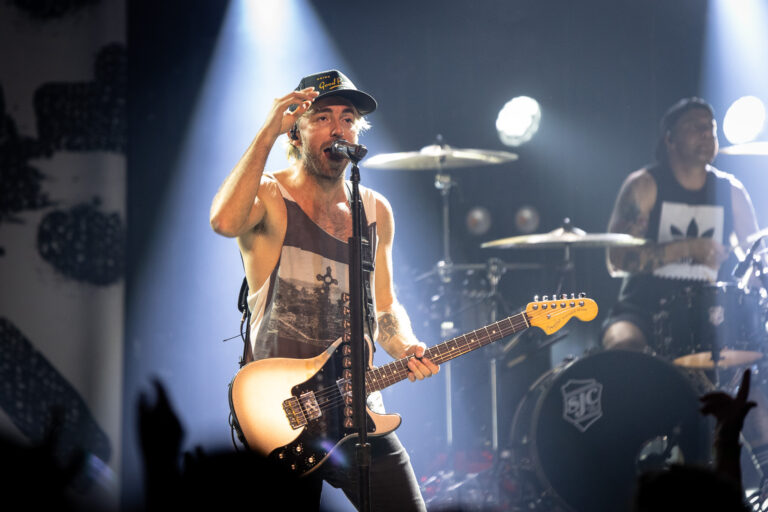 PORTLAND — Pop punk heroes All Time Low swept through Portland on Saturday, playing to a raucous, sold-out crowd at Roseland Theater. It’s the final leg of a months-long tour that found the band crisscrossing the continent multiple times, but the Baltimore-based scene veterans showed no signs of road fatigue during a high-energy 90-minute set.

The band opened with “Some Kind of Disaster,” the lead single from their ninth studio release, Wake Up Sunshine. “I’m a liar, I’m a cynic, I’m a sinner, I’m a saint,” sang frontman Alex Gaskarth before cannons fired huge blasts of confetti and streamers into the crowd. Fans shouted along with beloved favorites like “Lost in Stereo” and “Weightless” from All Time Low’s breakout 2009 release Nothing Personal, but more recent selections like “Dark Side of Your Room” and the smash hit “Monsters” — the highest charting song of the band’s career — were met with equal enthusiasm.

Playful banter between Gaskarth and guitarist Jack Barakat has long been a staple of All Time Low’s live performances, and Barakat needled his bandmate over a previous visit to Portland some ten years ago, where a flu-ridden Gaskarth could only perform a handful of songs before tapping out and being replaced by members of Yellowcard. “You could’ve played the show, man!” insisted Barakat. Elsewhere, Gaskarth ruminated on turning the band’s name into a symbol à la Prince, and quipped that they would be playing “an insane amount of songs… and an insane amount of Insane Clown Posse songs.”

See below for the full gallery of All Time Low photos from the Roseland Theater. The band heads to the west coast this week for shows in Oakland and Los Angeles before closing out the tour on Friday in San Diego. Tickets for those shows, along with a few remaining festival dates, can be purchased at alltimelow.com.

Setlist
Some Kind of Disaster
Dark Side of Your Room
Sleeping In
Cinderblock Garden
Damned If I Do Ya (Damned If I Don’t)
Weightless
Once in a Lifetime
Backseat Serenade
Time-Bomb
Life of the Party
Nightmares
Safe
Therapy
Missing You
PMA
Vegas
Lost in Stereo
Glitter & Crimson
Monsters
Dear Maria, Count Me In