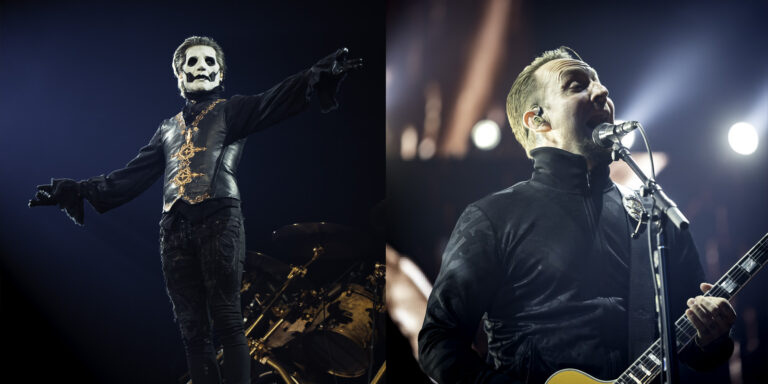 PORTLAND — “Are you ready to seal the deal with Volbeat?” asked lead singer Michael Poulsen as he strode onto the stage Saturday night at Veterans Memorial Coliseum. The crowd responded with a thunderous roar, and the massive curtain bearing the band’s logo dropped away as Volbeat launched into their opening number, “Seal the Deal.”

Former Slayer drummer Jon Dette — filling in for the band’s COVID-stricken percussionist, Jon Larsen — and bassist Kaspar Boye Larsen provided the foundation upon which lead guitarist Rob Caggiano laid his searing riffs, and the band tore through high-energy tracks like “Pelvis on Fire” and “Temple of Ekur” before stopping to indulge in a thunderous ovation from the audience.

The setlist was weighted heavily in favor of Volbeat’s latest release, Servant of the Mind, but they still managed to reach back into their catalog to showcase live staples like “Sad Man’s Tongue,” and “Lola Montez.” Their signature blend of metal and rockabilly kept the Portland crowd dancing for the duration of their 90-minute set, which closed with “Still Counting” from their 2008 release, Guitar Gangsters & Cadillac Blood.

It would be nearly an hour after Volbeat said their farewells before the show would continue, and the crowd grew restless as technicians and stagehands scurried about behind the curtain while ominous choir music was piped into the venue. Finally, just before 10:30pm, the lights came down and Ghost took the stage with an explosion of pyrotechnics and the opening notes of new track “Kaisarion” from their forthcoming release, Impera.

Vocalist Tobias Forge — better known by his stage name, Papa Emeritus IV — led his band of Nameless Ghouls (all clad in identical cloaks and steampunk-inspired gas masks) through a setlist comprised mostly of selections from 2015’s Meliora and 2019’s Prequelle, although they did treat the audience to another new track from their upcoming record, lead single “Hunter’s Moon.” The Swedish outfit’s penchant for theatricality was on full display throughout the 75-minute performance, which featured the requisite fog, lighting effects and extravagant backdrop, not to mention a few costume changes for Forge.

Ghost and Volbeat will spend the next month criss-crossing the US, traveling across the midwest and onward to the east coast before doubling back, dropping down through the southwest and wrapping up the tour in Anaheim on March 3rd.