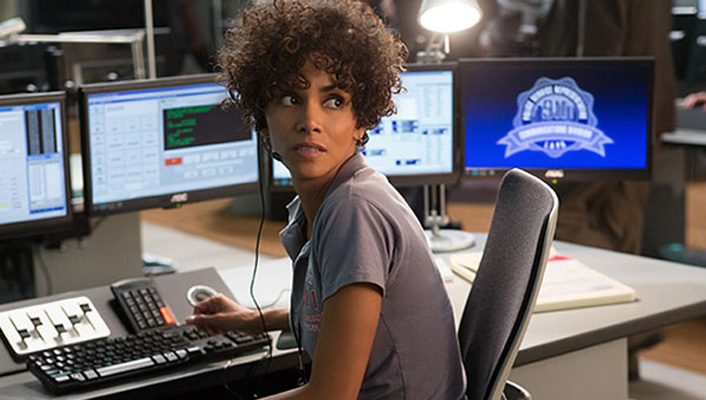 Jordan Turner (Halle Berry) is a veteran 911 operator thrust into action after receiving a call from recently abducted teenager Casey (Abigail Breslin). After a tense opening setup, the film takes a bit of a pause to let the audience breathe again. There’s some pretty horrible back-and-forth between Halle Berry and an operator trainee, and suddenly I recalled the tagline for the movie: “There are 188 million 911 calls a year. This one made it personal.” Yikes, what am I in for here?

You would think that a movie whose lead character is sitting at a desk on the phone would be hard to grab you, however director Brad Anderson does a nice job of bringing the drama and intensity to the audience. I have to admit, there were a couple of times I recoiled or jumped in my seat. Anderson keeps you engaged and has a nice play between what is happening at the call center and what is taking place with Casey. After plenty of gut-wrenching moments involving the abductor (played very creepily by Michael Eklund), you start to learn his motivations and an interesting tale unfolds.

For the thriller aspect alone, I would say this is a good date movie. I saw people both male and female clutching the arms of their significant others throughout the theater – hell, maybe they didn’t even know that person at all. However, there were aspects that could definitely kill the “cuddle up for safety” mood. One thing that got to me was how violent this movie was in some areas. I knew it wouldn’t be lollipops and rainbows, but it seemed like it was trying just a little too hard to go for a crazy/violent factor.

For what this movie is trying to be, it’s successful for the most part, but during the third act the “Seriously?” and “You’ve got to be kidding me” moments start to pile up to a point where it became so silly, it disconnected me from the movie almost entirely. Solid performances by the main cast can’t keep this train moving past the halfway point, so unless you really enjoy the theater-wide experience of jumping in your seat with everyone, I would say you can get the same tense feeling for much cheaper when The Call is available to view in the comfort of your own home. And on the arm of someone you know.

REVIEW – ‘Burt Wonderstone’ is funny, but definitely not incredible.