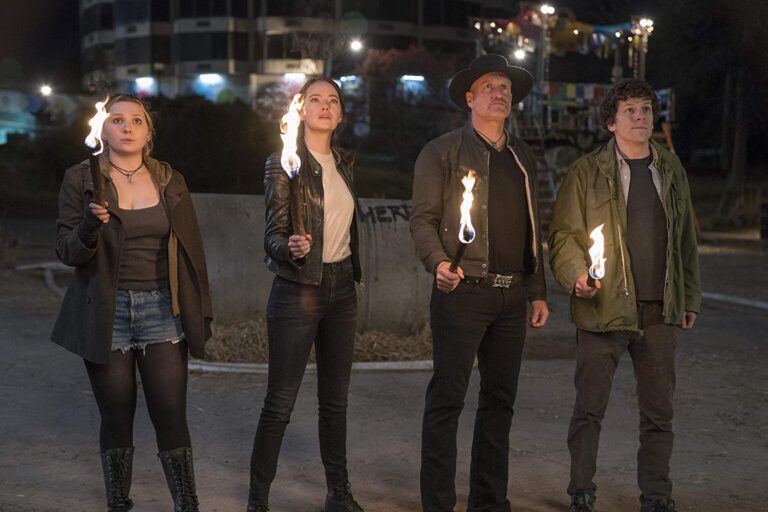 Comedy sequels — particularly those arriving more than a decade after the original film — can be something of a risky proposition, often landing with a thud and feeling like a poor imitation of the original. With that in mind, and with Zombieland: Double Tap hitting theaters this weekend, you’d be forgiven if you found yourself overly cautious about the prospect of revisiting the fearsome and funny foursome that made the first film such a blast. Luckily, this sequel turns out to be the exception rather than the rule.

Once again, the proceedings are narrated by Columbus (Jesse Eisenberg), who acknowledges the passing of time by with a self-referential joke during the opening voiceover, quipping “back for seconds after all this time?” Screenwriters Rhett Rheese and Paul Wernick have spent the decade since the original film polishing their meta humor skills with the Deadpool series, and although Zombieland: Double Tap doesn’t break the fourth wall as frequently — or as overtly — as Ryan Reynolds, the film nevertheless remains aware of how its predecessor fits into pop culture.

Likewise, director Ruben Fleischer has no aversion to referencing the previous film or some of its key elements. Columbus’ lengthy list of survival rules makes a return, often playfully emblazoned on background elements or used to punctuate a joke, and the “zombie kill of the week” cutaways are still intact (and still hilarious). It’s definitely a sequel that plays the hits, but there are clever new elements too, such as the classification of various zombie types: slow, stumbling corpses are “Homers,” while cunning, problem-solving flesh-eaters are dubbed “Hawkings.”

There’s also a new addition to the group, a ditzy blonde named Madison (Zoey Deutch) who’s been waiting out the apocalypse in a walk-in freezer at a deserted shopping mall. Bright-eyed, optimistic, and painfully stupid, Madison is the polar opposite of Wichita (Emma Stone) and a constant source of annoyance for Tallahassee (Woody Harrelson), who assesses her improbable survival with the purest of logic. “She’s still alive because zombies eat brains,” he tells Columbus. “And she doesn’t have any.”

The group are on a cross-country trip to find Little Rock (Abigail Breslin), who struck out on her own after meeting guitar-playing, patchouli-scented Berkeley (Avan Joglia). To the somewhat unlikely father figure Tallahassee, the notion of Little Rock embarking on a romantic journey is already terrible, but the discovery that Berkeley is both a musician and a pacifist is enough to send him into a rage. Piling into a minivan (much to Tallahassee’s chagrin), the quartet hits the open road once again, with their compass pointed toward Graceland.

It’s near the King’s manor that Zombieland: Double Tap introduces its other major player, Rosario Dawson’s Nevada, the whiskey-drinking proprietor of an Elvis-themed hotel. This second-act detour features a fairly amusing run-in with two characters (Luke Wilson and Thomas Middleditch) who are practically replicas of Tallahassee and Columbus, both in looks and personality, and leads to a frenetic, gore-streaked chase sequence edited to feel like it was filmed in a single take. It adds little the overall plot, but to be fair, this isn’t the sort of film that finds itself overly concerned with coherence.

The chemistry between Eisenberg, Harrelson and Stone is just as palpable this time around, although with Breslin excised from the group for most of the film, it sometimes feels like a vital part of the recipe is missing. Deutch does an admirable job trying to shore up this weakness, and some of the biggest laughs in Zombieland: Double Tap are a direct result of her character’s gobsmacking obliviousness, which Columbus frequently tries to excuse while Tallahassee roles his eyes and Wichita stares daggers at the newcomer. Truth be told, I would have preferred the film scale back the climactic finale and spent a little more time on these character-driven moments, because they’re consistently funnier than the big setpieces.

Speaking of the climax, it takes place in a hippie commune called Babylon, a tie-dyed skyscraper where weapons and survival skills are traded in for drum circles and bags of weed. There could have been plenty of humor to mine from the idea of a non-violent community situated squarely in the middle of the zombie apocalypse, but by the time we arrive the film is already careening toward the ending. That being said, the brisk 99-minute runtime is a welcome respite from comedies that overstay their welcome, and offers more than enough laughs to delight fans of the original.