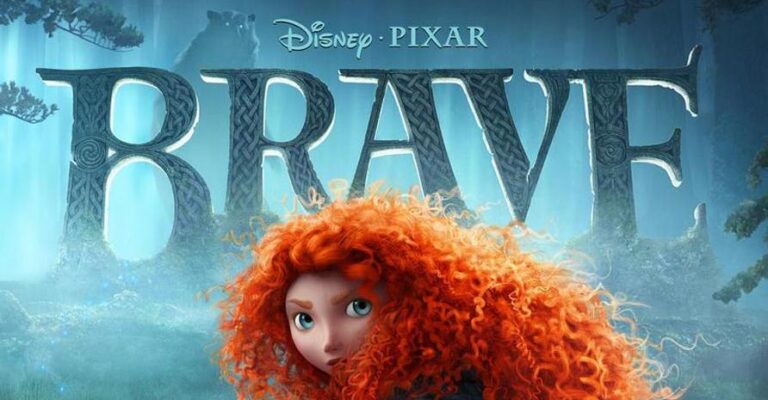 Brave is the tale of a strong-willed heroine with a flair for archery, held down and oppressed by those above her. While there are no games that involve hunger in this one *ahem* judging by the general excitement around this film and that little bit of name recognition that comes along with a certain company called Pixar, Brave should at least have a big box office return in common with that aforementioned franchise. The heaps of cash flow will be mostly deserved because despite more flaws than normal for a Pixar movie, Brave is still a gorgeously animated and highly enjoyable film.

Brave’s characters and story feel less like a traditional Pixar movie and more like classic Disney fare such as The Little Mermaid or Beauty and the Beast. It has all the traditional staples including a restless female lead, a witch/curse, and one-dimensional (yet zany and fun) side characters. In this film’s case, the lady in question is the frizzy-haired tomboy Merida, who is hampered with being the princess of her Scottish kingdom of DunBroch and is beautifully voiced by Kelly MacDonald (Trainspotting, Boardwalk Empire). Merida would rather spend time riding her horse Angus and working on her archery than taking etiquette lessons from her somewhat overbearing yet still loving mother Queen Elinor, voiced with nuance by the great Emma Thompson (MIB3, Harry Potter). When an unknown magic seems to offer a chance for Merida to change her fate as princess, she accepts the offer but quickly finds the results to be far different than she expected.

If the plot sounds familiar, it’s because you’ve seen it a million times. But surely the movie does something all Pixar-y and flips the switch on the premise right? Eh, not really. That doesn’t mean that this film isn’t a great example of this particular story structure, it’s just that it doesn’t add much to the equation. As mentioned before, the Scottish kingdom of DunBroch is visually stunning, full of beautiful lush landscapes and sweeping vistas. And maybe it’s just because of the accents, but the mostly Scottish cast is a joy to listen to, with the slight exception of MacDonald’s somewhat annoying pronunciation of “fyyaaaaate” that is constantly over-used in the film. Brave also has a wonderful score by Patrick Doyle that, as you’d expect, is full of bagpipes and traditional Scottish music, and it’s a refreshing and welcome change from the majority of the other summer tent pole soundtracks.

The supporting characters are all unfortunately under-developed but provide a lot of the film’s more humorous moments. Billy Connolly (Boondock Saints) is lovable and on-point as the fatherly King Fergus and there’s some great chemistry between him and MacDonald. Merida’s three troublemaking brothers will no doubt be the favorites for many kids, stealing every scene without uttering a word of dialogue. The rogue’s gallery of Lords that present their sons to compete for Merida’s hand are also hilariously designed, and left me wanting more opportunity to explore the people in these clans than the screen time allotted.

Unfortunately, it’s not all good news, as many things caught me off guard and really detracted from the overall enjoyment of the film. There are a couple of montages using Scottish pop-style songs that felt really out of place in a Pixar film (Dreamworks perhaps?), disjointing the scenes they were meant to enhance. Not that they were bad songs, mind you – they just didn’t work here. The second half of the film got a bit too decidedly fairy-tale for my tastes, with some magical twists that took the movie in an odd and less-grounded direction, leaving behind the fun at the kingdom for hijinks in the woods with witches, wisps, bears and spells. The complete shift in tone didn’t really work for me, and I’d rather have seen more of Merida defining her role in the kingdom and perhaps training to be a warrior while evading her would-be suitors.

Pixar has yet to make a bad movie (I’ll forgive you, Cars 2) and Brave certainly doesn’t ruin their street cred, but it isn’t the sort of masterpiece we’ve all come to expect. The story doesn’t have multiple intellectual layers, but it does move along at a brisk pace and provides more than its fair share of visual wonder. The talented voice cast also takes material that is essentially a throwback to classic animated Disney films and makes it seem fresh. Lack of depth aside, Brave is a good family film with enough heart and naive charm in a classic fairy-tale style to be considered another successful outing for Pixar.

SECOND OPINION
Despite eye-popping visuals and a brilliant voice cast, Brave struggles to ascend to the heights of other great Pixar films. Nearly everything about it feels just a bit too familiar, and while there’s no question that the experience was entertaining, it feels as though Pixar is resting on their laurels rather than continuing to innovate.
3.5 stars
— Brent