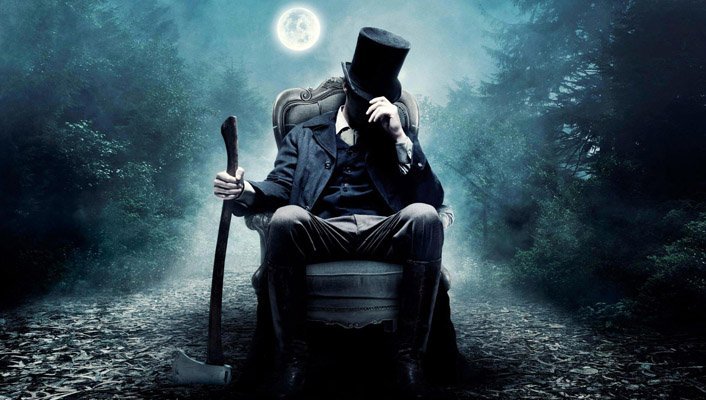 Built on a bizarrely creative (and admittedly ridiculous) premise, Abraham Lincoln: Vampire Hunter tells the “true” story of the life and times of the young man who would become the 16th President of the United States, and the lifelong battle he waged against the forces of darkness that sought to enslave our country.

As a boy, Abraham Lincoln witnesses the murder of his mother at the hands of a prominent local businessman, and spends the entirety of his adolescence plotting his revenge. Unbeknownst to Lincoln, the man responsible for his mother’s death is a creature of the night, unable to be destroyed by conventional means, and a botched assassination attempt leaves the adult Lincoln (Benjamin Walker) barely escaping with his life thanks to Henry Sturgess (Dominic Cooper), a wealthy eccentric with a passion for vampire slaying who agrees to pass along his knowledge and wisdom.

Armed with a silver-edged axe, Lincoln doles out justice in terrifically stylized fashion, assassinating vampiric bankers, shopkeepers, and politicians on his way to the top of the food chain, where Adam (Rufus Sewell) awaits on his lavish southern plantation. Along the way, Lincoln weds the gorgeous Mary Todd (Mary Elizabeth Winstead) and establishes himself as a prominent voice in government, a path which will eventually lead to the White House, and a confrontation with a centuries-old secret that threatens to unravel the very fabric of the nation.

If everything up to this point sounds completely insane, that’s because it absolutely is, and we’ve only begun to scratch the surface. Abraham Lincoln: Vampire Hunter is at its best when it revels in its goofiness, but finds itself bogged down when it attempts to take itself too seriously. If there’s one thing director Timur Bekmambetov can do, it’s put together a wildly inventive action sequence, and you’ll find them peppered throughout the entire experience, culminating in a jaw-dropping climax aboard a speeding train. But if you’re looking for nuance and subtlety in the narrative, you’ve wandered into the wrong film.

Walker has a commanding screen presence, and his best work comes during the film’s third act as the aging Lincoln copes with the death of his son and the exhaustion of fighting a war against his own countrymen. It’s a shame that the bulk of the film is focused on the character’s early years, as there’s something truly magnificent about watching the bearded and bespectacled President dispatching ravenous vampires with a razor-sharp instrument of death.

Unfortunately, the performance quality does not carry over to the supporting cast. Cooper finds himself somewhere between Jack Sparrow and Tony Stark, but without the charisma, and Sewell is little more than a caricature, a third-grader’s idea of what a villain should be. A lot of these issues could also be attributed to the screenplay by Seth Grahame-Smith, who frequently abandons the source material in favor of bland dialogue and non-existent character development.

As a pure popcorn movie, Abraham Lincoln: Vampire Hunter succeeds more often than it fails. It’s a silly idea that results in plenty of campy fun, but once the smoke clears and the excitement dies down, audiences will likely find themselves wanting more from the experience.