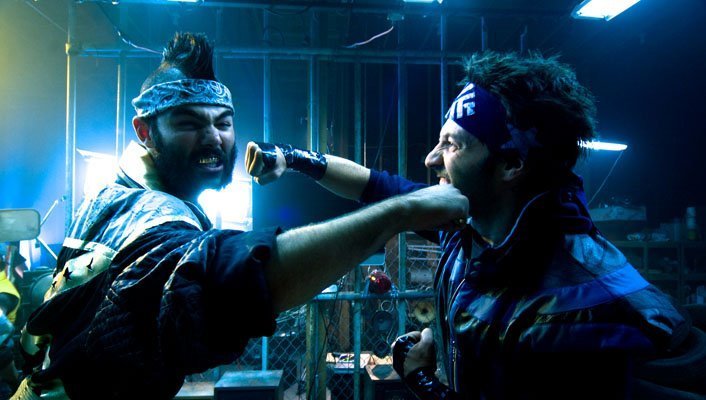 Frazier Park has become a wasteland, a decaying tract of land where two rival gangs vie for control of the city’s resources, battling each other in arena-based combat by playing competitive dance video game Beat Beat Revelation. After the death of his mentor, JTRO (Jason Trost) goes into a self-imposed exile, while the sadistic L Dubba E (Lee Valmassy) maneuvers himself into a position of absolute power.

With the town reeling from the effects of L Dubba E’s influence, KCDC (Art Hsu) tracks down JTRO, begging him to return and settle the score with his old rival. When JTRO discovers that L Dubba E has laid claim to his former love interest, Stacy (Caitlyn Foley), he undergoes a rigorous training regimen to prepare himself for the final battle that will decide the fate of Frazier Park once and for all.

The FP is a bizarre sort of mash-up that borrows liberally from The Warriors, Boyz N The Hood, Mad Max, and Rocky to create an experience that feels both unique and familiar. Despite its ridiculous premise, everything in the film is played 100% straight, which only adds to the absurdity of white kids spouting off hilariously obscene trash talk, frequently referring to each other (and themselves) as “nigga” while crowds gather to watch costume-clad gangbangers dance each other to death.

Despite being shot on a low budget, The FP boasts a solid video transfer, allowing the viewer to appreciate the level of detail that went into creating this dystopian future. Exterior shots feature a wide variety of colors and good contrast, but interior scenes, particularly in the dimly lit hallways of the clubs, feel a bit washed out. While the audio mix is fairly simplistic, the score by George Holdcroft features a ton of synth-heavy compositions that should hold plenty of appeal for fans of techno and dance music.

The FP includes a full-length commentary track with the Trost brothers, which is disappointing in its lack of energy or enthusiasm. There’s plenty of interesting material here, but for a film that was a passion project for everyone involved, you would expect some of that earnestness to be more prominent in the conversation. The remaining supplemental materials are pretty standard fare, with the biggest attraction being Never Ignorant Getting Goals Accomplished: The Making of The FP, a detailed look at the film’s origins, as well as costume design and scoring.

While The FP lacks any sort of mainstream appeal, it will certainly resonate with a particular kind of audience, as evidenced by sold-out festival screenings prior to its Blu-Ray release. While the film’s technical and conceptual shortcomings are both on display throughout The FP, it’s impossible not to commend the filmmakers on using a limited amount of money and resources to create something so polished.