[REVIEW] Death doesn’t like to be cheated… especially at poker. 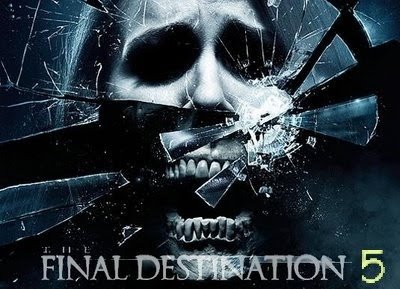 The things I do for you guys, I swear.  I just got home from seeing the latest entry in the Final Destination franchise.  Be warned, there are SPOILERS in this review, so turn away if you do not want the huge twist ending ruined for you.  Or if you actually really enjoy the series, you may not want to read further, as I plan to make fun of it the the best I can.

For those of you who may have been living in a fallout shelter for the last decade and have never seen a Final Destination movie, I’ll fill you in on what you’ve missed.  Not much.  The basic idea is that someone sees a premonition of a ridiculous disaster and then everyone dies in a horrific, gruesome manner.  Trust me, these guys absolutely love their over-the-top CGI death scenes.  I had very minimal expectations going into this movie.  I pretty much went into it with the same mindset I had for the last five Saw movies – the story is depleted at this point, but hey – at least I get to see people get mutilated.  When you see a Final Destination movie, you’re not really there for character development or the remote possibility of a plot.  You just go in knowing people will get slaughtered in elaborate death sequences that even Rube Goldberg could never have conceived.  Final Destination 5 lives up to that expectation, but brings a little something extra to the mix.

I decided against seeing the 3D version of the film, and instead opted for the regular digital projection screening (my utter hatred for Hollywood’s fascination with 3D is a tale for another day, coming soon).  Within the first 5 minutes I was second-guessing my choice due to the crazy in-your-face opening credits reel.  Actor names and job titles on glass being shattered by random objects looked pretty dumb coming at me without the 3D effect.  But if you pay attention to all of the random objects, they’re not random at all.  It wasn’t until I saw the prosthetic hook hand come at me that I realized all of the objects killed a character in one of the previous movies.  Ladders, tires, barbed wire fences, things like that.  Thankfully, once the movie kicked in, the 3D regrets were long gone.

The movie starts out with a bunch of people meeting up outside their office building, preparing for a weekend team-building work retreat.  I have to be honest, I didn’t bother trying to remember any of their names due to my lack of interest and the knowledge that most of them are going to die anyway.  The only characters that stood out were the always-awesome David Koechner, who plays the boss, and the Candyman himself, Tony Todd, reprising his role as the creepy coroner who knows what’s going on, but only tells the survivors just enough to freak them out.  The rest of the cast is full of new faces to me, so they’re just gonna get nicknames.

Dorky Lead Male and the rest of his doomed co-workers load up onto the bus and hit the open road for their weekend trip.  Captain Dork sees a vision of his friends being picked off one by one in the most ridiculous bridge-collapsing sequence I have ever seen in my entire life.  Lieutenant Dork snaps out of his vision and the signs come true, as always.  Then the bus radio plays Dust in the Wind by Kansas, which everyone knows is the signal to get the fuck off the bus, now!  Dork McFuckbag and his friends escape, and then we spend the next hour watching and waiting for each survivor to bite it.  Much like previous entries, you find yourself anticipating each death.  You know they’re going to die, you see the pieces coming into place, but it takes plenty of build-up for these characters to finally croak.  And this time around, the deaths barely had anything to do with the build-ups.  Remember that scene in the trailer where Gymnastics Girl is on the balance beam, and doesn’t notice the screw she’s dancing around?  Yeah, she doesn’t even die from that.  Same deal with Fat Loser getting the acupuncture, and Unrealistically Hot Girl with the Lasik surgery.

Tony Todd tells the survivors that there is a chance to defeat death’s stupid plan, that if they kill someone else as a replacement, they can take the years that person had for themselves and escape death.  We find this to be true when Token Black Guy accidentally kills his coworker and gets skipped in the order.  Knowing this, Gymnast Girl’s boyfriend, who shall henceforth be knows as Eyebrows (see the movie and you’ll understand) loses it at the end of the film and tries to kill Mr. Dork and his girlfriend, Ms. Dork, in an effort to save himself from his inevitable death.  Huge fight scene, Mr. Dork kills Eyebrows, and the Dynamic Dorky Duo is safe from death’s grasp…

Until we see them getting on a plane to Paris a few days later.  Yup, that’s right.  A plane to Paris, where they witness a struggle involving Devin Sawa’s character from the original film, which results in a group of students being escorted off the plane.  Mr. Dork looks down at the date on his plane ticket – March 13, 2000 – just as the plane begins to fall apart and explode, building up to the events from the first movie.  Then we cut to Token Black Guy at the memorial for the coworker he killed.  Turns out the coroner discovered a massive rupture in his brain, and the guy would’ve been dead in a few days, anyway.  The plane crashes into the bar, Token Black Guy dies after all, and death wins.  YAY!

So we were watching a prequel the whole time?  I do have to give credit to the writers for adding that little bit of closure and bringing the story full circle, instead of just rehashing the same basic idea with similar circumstances.  The ending credits had a nice little bonus, too – a montage of every death scene from all 5 movies, rendered in 3D and mixed to AC/DC.  My decision to see the regular version of the film caused me to miss out on that little nugget of 3D joy, but oh well.  As far the movie itself goes, it was alright.  Not as cheesy and horrible as I expected, but nothing to run out and tell all of your friends about.