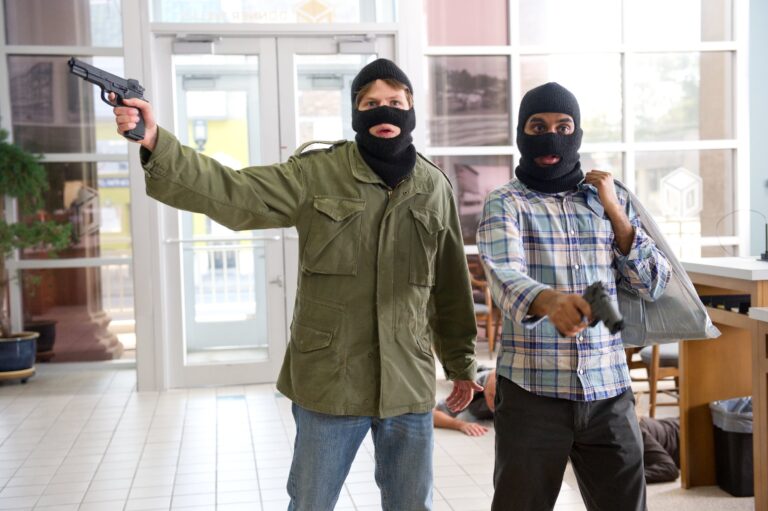 The success of 2007’s Superbad opened the doors for a resurgence of raunchy, ridiculous buddy comedies.  Role Models, Stepbrothers, The Other Guys and I Love You, Man would probably never have happened if McLovin and friends hadn’t reaped a colossal $121 million at the domestic box office.  And of course, let’s not forget 2009’s The Hangover, which sent a firm message to Hollywood that there was a profit to be made from movies about a bunch of guys boozing it up and getting into incredibly implausible situations.  The latest offering from this genre is 30 Minutes or Less, which reunites Zombieland director Ruben Fleischer with star Jesse Eisenberg.

Nick (Eisenberg) works a dead-end job delivering pizzas, and spends the rest of his time drinking and getting high with his more-successful best friend Chet (Aziz Ansari) while masking his feelings for Chet’s twin sister, Kate (Dilshad Vadsaria).  Meanwhile, Dwayne (Danny McBride) lives in the shadow of his father, a retired Marine Corps major (Fred Ward) who won his fortune with a $10 million lottery ticket and has nothing but contempt for Dwayne and his closest friend, Travis (Nick Swardson).  Dwayne’s hatred of his father and his desire to become his own man lead him and Travis to devise a plan: find some unwitting schmuck and force him to rob a bank.  All it takes to find their patsy is a phone call to the local pizza shop, and Nick suddenly finds himself with a homemade bomb strapped to his chest, and less than nine hours to walk into the local bank and walk out with $100,000.  What follows is one ridiculous sequence after another, with every scene punctuated by wildly-inappropriate dialogue.

30 Minutes or Less does a great job of exploring and developing the bonds between the two groups of characters.  Dwayne belittles and mistreats Travis, whose desire (but complete inability) to assert himself echoes the same relationship Dwayne has with his father.  Nick finds himself jealous of Chet’s success and stability, never realizing that Chet is envious of Nick’s carefree attitude.  Amongst a steady stream of profanity, gunfire, and car chases, the characters all come to important realizations about themselves and their relationships with their best friends.

While unlikely to become an instant classic like Zombieland, this is a solid follow-up effort for Fleischer, and he does great work with the cast and the material.  Eisenberg is much more amped-up and frenetic here than his previous works, and Ansari’s low-key elementary school teacher is a far cry from the X-rated comic “Randy” that he portrayed in Judd Apatow’s Funny People.  The chemistry between the two is outstanding, particularly in an early scene which finds the two confessing crimes they’ve committed against each other throughout their childhood, each one-upping the other until the argument dissolves into a clumsy, awkward struggle that will resonate with anyone who grew up with siblings.  Not to be outshined, McBride and Swardson have their own bizarre simpatico, and nearly every dialogue exchange between the two is howlingly funny.  And Michael Pena has a scene-stealing role as a cold-blooded assassin who may not be as tough as he claims.

At only 83 minutes, the film careens along at a breakneck pace, and the jokes come at the viewer so quickly and mercilessly that some of the humor is bound to get lost.  The occasional infusion of action into the buddy-comedy formula gave me a bit of the Pineapple Express vibe, but whereas Express was hampered by running about 15 minutes too long, the ending of 30 Minutes or Less feels a bit too rushed.  It’s a very minor complaint, and I’m sure we’ll get a longer cut on the eventual Blu-Ray release, but I can’t help but feeling that the film (and the audience) could have been served better if we hadn’t slammed on the brakes and come to a screeching, unexpected halt.