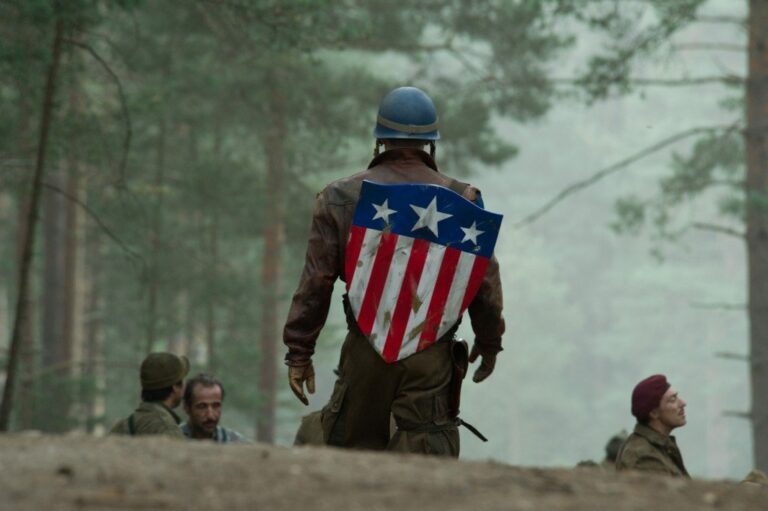 *Mild Spoiler Warning*
Sitting in the theater as the lights went up and the beautifully-designed WWII propaganda end credits splashed across the screen, I was struck with a thought: It’s an amazing time to be a comic & film fan. I remember as a kid begging my mom to take me to the local hole-in-the-wall video rental stores.  I’d immediately scour their shelves for any sign of the rare VHS tapes of the existing classic superhero fanfare such as the 70’s Spider-Man TV-movie/series (Lookout criminals! He’s swinging! On a rope! Badly!), the Bill Bixby Incredible Hulk movies/series (geek tidbit: Thor and Daredevil made appearances) and of course the unwatchable Captain America and its sequel. (Youtube this: Captain America: America! Fuck Yeah!) The funny thing is that even as a kid, I knew they were bad, but it didn’t matter. I soaked up every second of these heroes that were no longer confined to the page. They were alive and in action on my TV. And I was grateful.

Had a movie like Joe Johnston’s Captain America: The First Avenger existed back then, it would have absolutely fried my young impressionable mind with pure unfiltered vita-rays of happiness. It all just works. From a career-defining performance by Chris Evans as Steve Rogers, to the beautifully-shot WWII-era scenes in New York & abroad, to beloved veteran actors Tommy Lee Jones and Stanley Tucci stealing every scene in the film. Not to be outdone, Hugo Weaving is predictable, but as always, reliably good in the baddie role as Red Skull. The movie just oozes retro-cool while invoking other stylized period films such as Raiders of the Lost Ark, Sky Captain and the World of Tomorrow, and even Johnston’s own The Rocketeer.

Captain America is an extremely difficult character to translate to the big screen, and quite frankly, should not work in this day and age of flawed anti-heroes. Not to mention the difficulty of getting a film called Captain America made with the current anti-US sentiment prevalent in the rest of the world.  It’s a wonder this film was even greenlit to begin with, and in the hands of a different director/cast it could have been a disaster. But I can’t help but feel kids growing up with this movie version of Cap will have a similar experience to those in my generation that grew up with Christopher Reeve’s Superman – they have a role model.

Steve Roger’s greatest strength is simply that he is a good man, a good man who does not compromise himself, who perseveres regardless of the world around him. He inspires. He’s someone we all want to be. Evans flawlessly portrays this without resorting to being too cornball or preachy… at least not more than needed, with the right subtlety and charm. That is why this film connected with me better than my prior favorite of the summer, X-Men: First Class. Even if we don’t believe we are good people ourselves, inside we all root for someone we believe is genuine and good, no matter how cynical we might have become.  And if you aren’t rooting for Steve Rogers when he jumps on a grenade for his fellow cadets in boot camp, then this movie isn’t for you. I’m sure there’s something more broody and dark down the hall.

By the time the all-out-pulp comic book action gets rolling, we are already so invested in Steve Rogers as a character that you willingly suspend your disbelief and just enjoy the sheer fun and carnage that is happening on screen. Don’t let the first half of the film fool you. There is some crazy shit in the third act, people. Laser guns, city sized aerospace ships, dimensional portals, comic cubes… yes Marvel fans, that kind of cube. This is popcorn filmmaking, the way it should be.

The nitpicks are all minor.  The third act’s opening montage felt out of place, like Michael Bay snuck into the editing room while Joe Johnston was out on a smoke break and spliced in as many slow-motion shots of Cap leaping away from explosions as possible.  And much like the whole of Iron Man 2, this movie’s ending was hampered a bit by having to be the lead-in piece to The Avengers. Don’t get me wrong, I adore the cross-pollination of these films in the build-up to The Avengers. But it’s clear at what point Captain America should have ended and The Avengers clearly begins. In addition, right before the end credits roll you are left on a sad line of dialogue, ending an upbeat movie on a downbeat note. Quick! Cue the high energy end-credits sequence with that catchy propaganda song! Wha-huh?!

But Johnston & Co. accomplished what they set out to do. They proved that in current cinema, you can make a good comic film where the protagonist is not a shades of gray anti-hero, yet still iconic and recognizable, and definitely someone to look up to.
Fifteen years ago, with few exceptions, bad movies were acceptable for superhero films because it was our only option as comic nerds. Now we exist in a world where an Avengers movie is actually going to happen. Top directors are telling the beloved stories we grew up on with a huge canvas, mega-budgets and some of the best actors working today. And I’ll be damned… against all odds, I just saw a great Captain America movie.  And that is inspiring.