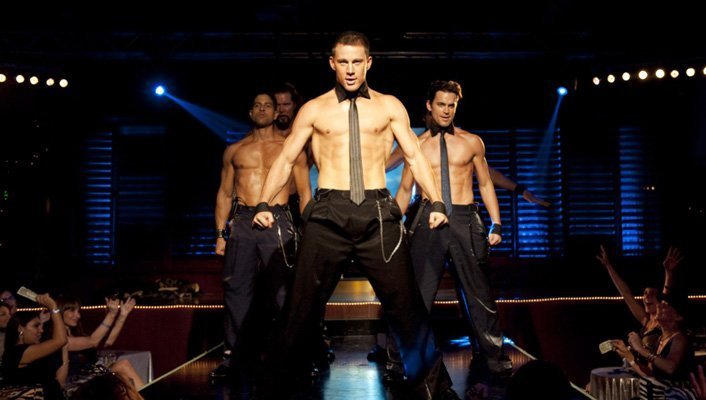 Set against the backdrop of the Florida club scene, Magic Mike stars Channing Tatum as a construction worker and entrepreneur who moonlights as the key attraction at Tampa’s most popular all-male dance revue. As the biggest star of the club, Mike is looked up to by the rest of boys, especially the naive 19-year-old Adam (Alex Pettyfer), the latest addition to the team which also includes Big Dick Ritchie (Joe Manganiello), Ken (Mart Bomer) and Tarzan (Kevin Nash).

Adam’s older sister Brooke (Cody Horn) is less than thrilled about her baby brother’s life choices, which immediately puts her at odds with Mike. Brooke hates the late nights, the parties, and the booze, while Mike sees nothing wrong with Adam enjoying the fast-paced lifestlye that comes with his profession. But at thirty years old, Mike finds himself wondering if he might be past his prime, and contemplates a career change that will take him away from the stage and into a partnership with club manager and longtime friend Dallas (Matthew McConaughey).

At its core, Magic Mike is a story we’ve seen many times before, the trials and tribulations of someone working in a less-than-savory industry while longing for a chance to break out and be themselves. The film benefits greatly from Tatum’s natural charisma, as he finds a near-perfect balance of humor and drama to make his character the most captivating person onscreen at all times – even in the presence of McConaughey, whose outrageous turn as owner, emcee, and occasional dancer will be one of the most talked-about performances of the year.

Unfortunately, Magic Mike is brought down by a handful of bizarre narrative choices, including an out-of-left-field conflict that arises during the third act and never gets resolved, and an abrupt ending that feels completely out of touch with the rest of the film. Plot threads are left dangling and character arcs incomplete, which results in the overall experience being somewhat dissatisfying.

Much like The Girlfriend Experience, Soderbergh’s previous foray into the exploration of the adult industry, Magic Mike features an impressive performance from a lead actor and plenty of enjoyable moments, but fails to assemble itself into a cohesive package. There’s still plenty of humor, as well as eye-candy for the ladies, but those looking for a more meaningful experience won’t find it here.