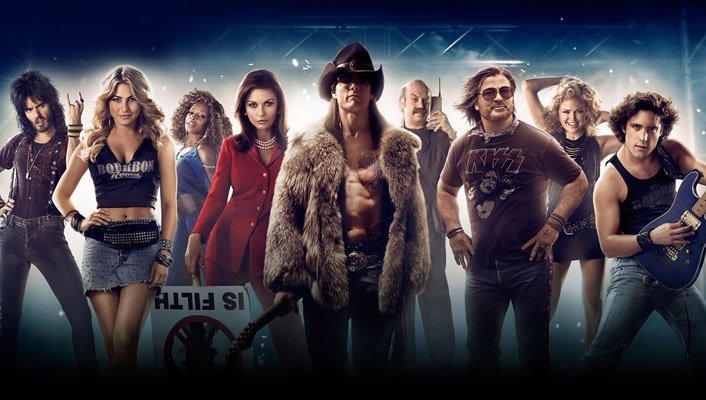 Starry-eyed Sherrie (Julianne Hough) has just arrived on the Sunset Strip with a suitcase full of records and not much else. A chance meeting with Drew (Diego Bonita) lands her a job at the notorious Bourbon Room, where rock idols are born onstage in front of hundreds of drunken, screaming fans. Unfortunately for owners Dennis (Alec Baldwin) and Lonny (Russell Brand), the club has become a lightning rod for controversy thanks to opposition from the pious wife (Catherine Zeta-Jones) of the newly-elected mayor (Bryan Cranston), and as the bills continue to pile up, the Bourbon seems destined for failure.

In a last-ditch attempt at salvation, Dennis calls in a favor from Stacee Jaxx (Tom Cruise), the legendary lead singer of Arsenal. Stacee is on the verge of launching a solo career that promises to catapult him into superstardom, and agrees to schedule Arsenal’s farewell show at the Bourbon, with a promise to pack the house and guarantee a big payday for the venue. But when a sexy Rolling Stone reporter (Malin Akerman) catches Stacee’s eye and his sleazy manager (Paul Giamatti) takes over, things go from bad to worse.

Rock of Ages suffers from many of the same problems that have plagued other stage-to-screen adaptations – while the usage of recognizable music to tell a story is incredibly well-done, much of the dialogue between the musical numbers feels unconvincing, and many of the jokes that attempt to poke fun at staples of 80s culture fail to hit their mark. Sherrie and Drew are meant to be the focal point of the story, but Stacee Jaxx quickly establishes himself as a far more interesting character with a much more compelling arc, and the film’s best moments occur anytime Cruise appears onscreen.

Despite these minor flaws, the film does so many things right that forgiveness comes very easily. Costumes and set design do a remarkable job of creating the perfect atmosphere, and clever song arrangements ensure plenty of memorable moments, such as when a group of protesters sings We’re Not Gonna Take It while club patrons respond from across the street with We Built This City. The diverse song selection has something for everyone, whether it’s watching Catherine Zeta-Jones bring swagger and arrogance to Pat Benatar’s Hit Me With Your Best Shot, or being awestruck as Tom Cruise belts out a ferocious rendition of Def Leppard’s Pour Some Sugar On Me.

Nothing captures the feeling and emotion of an era quite like its music, so it’s appropriate that a film about chasing dreams and finding love in the middle of the 1980s rock scene should be packed with some of the most iconic and memorable hits of the decade. Rock of Ages may feature a stellar ensemble cast, but the true star here is the music.