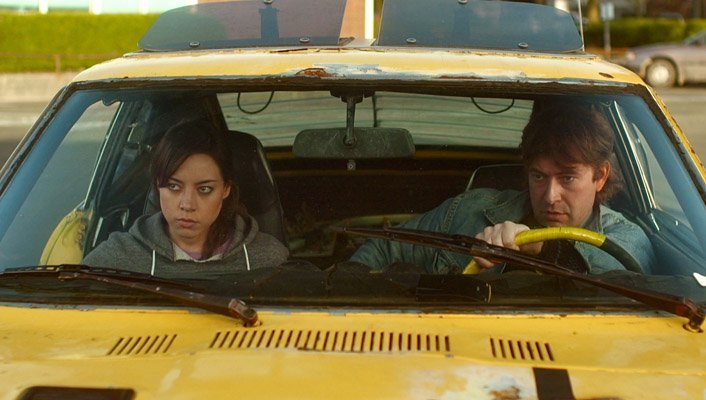 Jeff (Jake Johnson) is a hotshot reporter at a struggling Seattle-area magazine looking for his next big scoop, and when he stumbles across a classified ad for a time-travel companion, he enlists the help of two young interns to accompany him to a rural Washington town in order to track down the author. Jeff abandons the assignment in favor of reconnecting with an old flame, and it’s up to the cynical Darius (Aubrey Plaza) to take charge.

A stakeout at the local post office leads her to Kenneth (Mark Duplass), a grocery store clerk obsessed with martial arts and firearms training, and convinced he’s being followed by shadowy government agents. Posing as a potential candidate, Darius begins spending time with Kenneth as he prepares for his journey, and at first is convinced that he’s completely delusional. But as the days go by, she finds herself drawn in by his enthusiasm and sincerity, and begins to have conflicting feelings about manipulating and misleading Kenneth for the sake of a magazine article.

Plaza, who most viewers will recognize from supporting roles in Funny People and Scott Pilgrim vs. The World, carries the bulk of the film and showcases tremendous emotional range in her performance. Duplass also impresses, creating a character that is light-years away from his well-known alter-ego from FX’s The League.

The narrative stumbles a bit, thanks to a few awkward scenes where Jeff tried to turn the introverted Arnau (Karan Soni) into a ladykiller, and a puzzling subplot involving Jeff’s desire for romance that ultimately goes nowhere. Viewers would have been better served if director Colin Trevorrow had kept the film more tightly focused on its central characters, rather than devoting screen time to situations which have little to no bearing on the outcome of the story. Despite this, Safety Not Guaranteed is a quirky, original comedy with a unique premise, whose charm and earnestness echoes that of its oddball protagonist.