REVIEW – ‘Star Trek Into Darkness’ is the first bright light of the summer movie season. 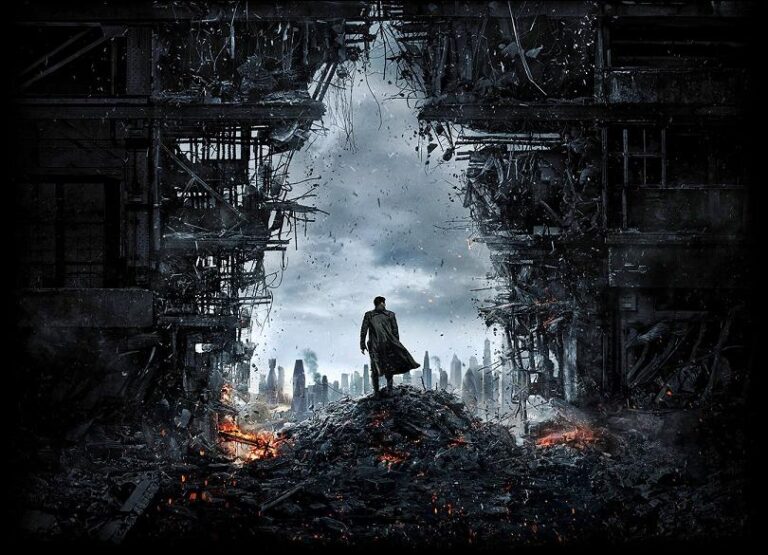 What J.J. Abrams has done with the Star Trek franchise is something fairly remarkable, especially when you consider everything about his first film seemed like it was destined to fail. Even the most forgiving fan-eyes rolled when they heard of the “gritty reboot” full of young attractive unknown actors (some of which were only known for comedic roles) and directed by a guy known solely for his work on TV. But the end result was lightning in a bottle that resulted in one of my favorite movies of the last decade and one of my go-to comfort films.

Which made the task of crafting a successful second outing all the more monumental to Abrams and Co. in order to prove that the first film wasn’t just a fluke like many suspected. Star Trek Into Darkness does not falter in that challenge and delivers an action-packed adventure in a wondrous universe, balanced with a strong emotional core and bringing audiences the first real success of the summer movie season.

Strangely enough the film has a lot of parallels with Iron Man 3 and if you’ve read my review you’d probably think that indicates my distaste for this film. But to the contrary, while having some similar plot structures and twists, Into Darkness never undermines any of its characters in the process.

The greatest strength of the film is actually just how beautifully perfect the characters are conceived and then made even better by the actors portraying them. There is no doubt after this film that this cast now owns these roles in the minds of this generation, most notably Kirk (Chris Pine) and Spock (Zachary Quinto), who have some tremendous material to work with and have great character and relationship development in the film.

[pullquote_left]There is no doubt after this film that this cast now owns these roles in the minds of this generation.[/pullquote_left]While this is clearly a Kirk/Spock film the supporting crew gets to spread their wings a bit more this time out after getting their origins out-of-the-way in the first Star Trek. Simon Pegg gets a largely beefed up role and has really come into his own as Scotty. He’s just perfect and gets his own side-story in this film.

Chekov (Anton Yelchin) and Sulu (John Cho) have sadly less to do this time out but each character does have their one “big” moment that makes you appreciate their continued participation in the story. Dr. “Bones” McCoy (Karl Urban) takes up right where he left off with his pessimism and silly jokes, but you still can’t help but love him in the role, while Uhura (Zoe Saldana) is reduced to bickering with Spock most of the film and generally takes a large step back as a character, although some of their relationship conflict is humorous.

Making his first splash in American cinema is the enormously talented Benedict Cumberbatch (Sherlock) as one of the film’s villains, John Harrison, and it’s here where I start having issues with the script. Cumberbatch is as exceptional as I expected but surprisingly very under-written, making it clear Abrams needed someone with Cumberbatch’s gravitas and skill in this role because it easily could have been awful and one-dimensional. There’s definitely more to the character than the marketing has led you to believe but that doesn’t result in the character being realized to its full extent. Follow me?

Star Trek Into Darkness is also big on the fan service and is absolutely loaded with cameos and references to major characters and events from the alternate Trek original series timeline. I don’t even have the extensive knowledge that many have on the subject and still caught quite a few easter eggs and surprises that made me laugh and smile often.

In addition, Alive Eve is added to the mythology as Carol Marcus but is almost completely unnecessary on most levels beyond the bra and panties scene in the commercials and something for the command crew to ogle. Sure, she’s smart and helps out, but you really get zero feel for who she actually is as a character. But her father, Admiral Marcus (played by Peter Weller) is a complex and unexpected character played in one of the stronger career performances by the Robocop actor.

[pullquote_right]Nails the essense of every character with grace and poise but fumbles when it comes to the actual story.[/pullquote_right]For those curious on the visual options for the film, my screening was on a standard 3D screen and was a frustrating mixed bag. The shots of the Enterprise going into warp are some of the coolest 3D shots I’ve ever seen on film but quite a few times, especially early, certain battle and space shots get far too gimmicky with objects being thrown directly at the audience and cheap tricks of that nature. Also, I’m not one to pile on the played out joke of J.J. Abrams and his overuse of lens flares (never bothered me) but the 3D flares hurt my eyes and really pulled me out of the film a few times during key sequences.

The script is penned by Robert Orci, Alex Kurtzman and Damon Lindelof and nails the essense of every character with grace and poise but really fumbles when it comes to the actual story. The first 45 minutes are brilliantly paced and executed but things start to unravel as the twists of the real plot start to unravel. There are huge plot holes and convenient writing fixes at every corner and some of the decisions with the film’s climax are pretty cheap and predictable.

But Pine and Quinto should be paid whatever they want for as long as they want in order to keep them playing these roles into old age. This franchise has now solidified itself as a valid long-term series with a lot of legs and a clear visual style that will be exciting to see in other talented creative hands as well due to the inevitable departure of J.J. to shepherd the other big “Star” franchise. Star Trek Into Darkness has so much charisma and heart that it powers through script issues to be everything you could ask for in a summer tentpole.