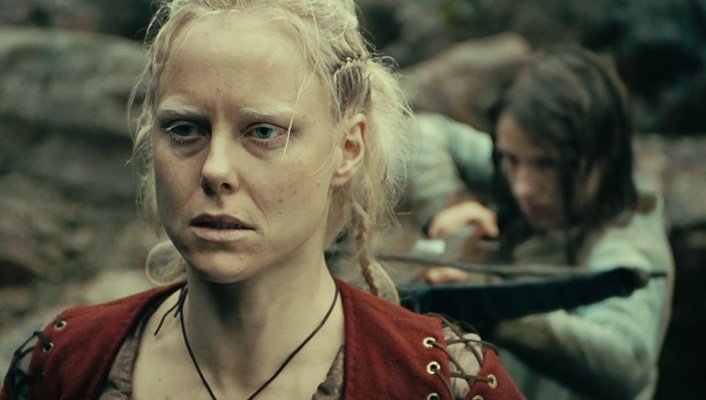 Once in a great while, a Direct-to-DVD film surprises me. Sometimes they make me laugh, sometimes they’re incredibly well put together. In the case of the movie Escape, a 2012 movie from Norwegian director Roar Uthaug that’s made its way to our shores like Leif Ericson, this one has surprised me with the quality of its cinematography. The acting from lead Ingrid Berdal is also especially of note.

The film, originally titled Flukt in Norway, begins introducing the main character as she watches her family murdered in front of her and is taken hostage by the raiders who killed them. Over the course of the film, she befriends another hostage and they escape together. The majority of the movie follows her and her friend as they run from their captors through some of the most epically beautiful landscapes I’ve seen on film.

As I’ve never personally been to Norway, the production crew of this movie could very well have just found an average Norwegian countryside to film. I’m not sure. Either way, the film is visually stunning and now I find myself pining for the fjords. Which, in a way, distracts from what you’re actually supposed to be paying attention to. More than once I found myself thinking “hey, they should go escape over there, it looks neat.” This is a problem for a movie, and it’s a problem brought on by the absolutely mind-numbingly mundane plot and dialogue.

The description I gave in the summary of what happens in this film is literally the only thing that happens in this film. It’s not a particularly well-designed story, surely isn’t anything new story-wise, and until the last ten minutes of the film it fails to make you really connect with any of the characters on any level. When you find yourself failing to care what happens to the characters in a film, it’s hard to care much about the film itself. The movie is also only 80 minutes long but seems a lot longer due to pacing issues.

Other nitpicky things aside, such as the costumes being pristine and clean in an era where people were literally vomiting themselves to death of the bubonic plague, Ingrid Berdal stands out in a cast of female actresses that show some serious chops. While the makeup department’s decision to bleach her hair and eyebrows when she’s already Viking-Blond to begin with is a little distracting, she portrays her character extremely well and does the best she can with the script she’s given. I’d honestly not be surprised to see her on Game of Thrones next year as a long-lost Targaeryan.

Overall, the movie is worth a lazy, hungover Sunday morning viewing if you can find it on Redbox or something. I definitely wouldn’t rush out to check it out, but you could do worse. Just be sure to watch it in the original Norwegian mode with subtitles. The English dubbing for this film was so atrocious I had to restart the entire thing about ten minutes in. And hey, with such gorgeous backdrops, if nothing else you could mute the film and just watch the pretty mountains happen.