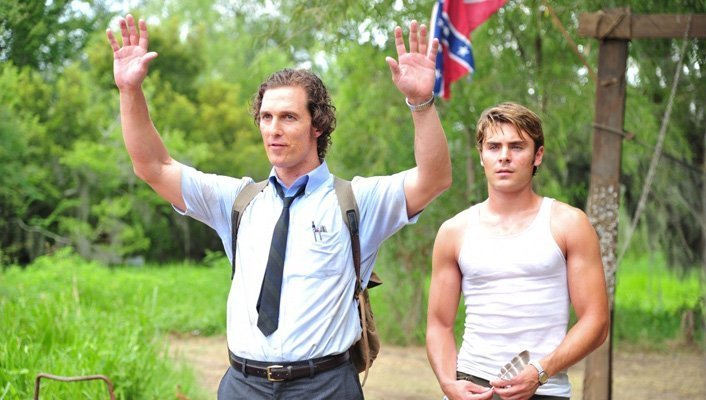 A morbid fascination with Death Row inmates has led Charlotte Bless (Nicole Kidman) to a rural Florida town in search of Ward Jansen (Matthew McConaughey), an investigative journalist for the Miami Times. Charlotte is convinced that Hillary Van Wetter (John Cusack) has been framed for the murder of a local sheriff, and enlists the help of Ward and his writing partner, Yardley Acheman (David Oyelowo), to prove Van Wetter’s innocence and get him released from prison so they can be married.

Along for the ride is Ward’s younger brother, Jack (Zac Efron), who immediately finds himself smitten with the sexy Southern vixen. As the facts surrounding the murder and Van Wetter’s conviction become increasingly suspicious, Jack finds himself faced with some disturbing and unfortunate discoveries about his friends and family that will force him to question everything he’s ever known.

Efron’s portrayal of an angsty, sexually repressed young adult should help him break away from the squeaky-clean image his career has been built on, and Cusack’s violent, misogynistic convict is at the opposite end of the spectrum from his usual fare, but neither can hold a candle to the riveting performance turned in by Kidman. At once sexy, trashy, funny and vulnerable, this may be the best work she’s ever done, and she fearlessly swings for the fences in every scene.

Awash in themes of violence, sexuality, and racism, The Paperboy is less about the mystery at its core, and more about the relationships formed between the characters throughout the investigation. Director Lee Daniels (Precious) is no stranger to exploring darker thematic material on film, and his latest effort is no exception. Nearly every character we encounter harbors a secret, and each revelation is even more shocking than the one before, leading to a heartbreaking, gut-wrenching climax.