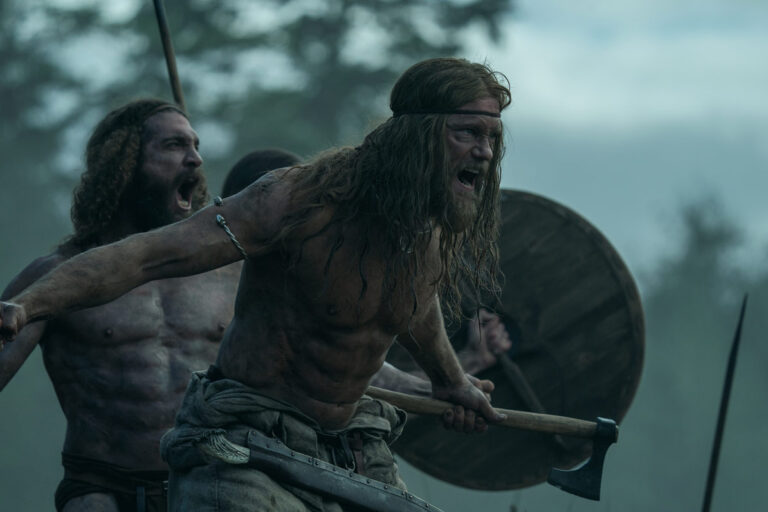 With a pair of acclaimed, modestly budgeted efforts under his belt — 2016’s mesmerizing folk horror The Witch and 2019’s fever dream of paranoia, The Lighthouse — writer-director Robert Eggers amassed enough clout to convince studio executives to open their coffers for his most ambitious effort yet. The result is The Northman, an intensely savage revenge epic that loosely adapts the Scandinavian legend of Amleth, which later became the basis for Shakespeare’s Hamlet. Viewers familiar with the latter will recognize the basic setup, which finds a young prince plotting revenge against the uncle who usurped his father’s throne. But the palace intrigue of the Bard’s version pales in comparison to the brutal and bloody approach Eggers takes to the material, where lengthy soliloquies in iambic pentameter are replaced by slashed throats, severed limbs and screams of fury.

After a months-long campaign of raiding along the coastline circa 915 A.D, a critically wounded King Aurvandill (Ethan Hawke) returns home with the notion of inducting his 10-year-old son Amleth (Oscar Novak) into manhood, preparing for his inevitable ascension to the throne. The hallucinogenic ritual, overseen by Heimir the Fool (Willem Dafoe), is scarcely complete before Aurvendill’s brother Fjölnir (Claes Bang) seizes upon the King’s weakened state to ambush him in the forest, beheading him as the boy looks on in horror. Amleth flees toward the shoreline — escaping one of his uncle’s lieutenants by biting off his nose — and catches a glimpse of Fjölnir parading Queen Gudrún (Nicole Kidman) through the village before he steals a boat and rows himself out to sea, repeating his new mantra over and over again: “I will avenge you, Father. I will save you, Mother. I will kill you, Fjölnir.”

Two decades later, that mantra seems all but forgotten as Amleth — draped in animal skins and now portrayed by a chiseled-as-fuck Alexander Skarsgård — leads a band of Viking raiders carving their way through the Land of the Rus, beheading and dismembering anyone who deigns to oppose them. Eggers stages one such village raid as a hypnotic single take, the camera tracking along with Amleth as he snarls, stabs and slices his way through dozens of foes with the efficiency of Godzilla stomping through a papier-mâché city block. Skarsgård is no stranger to channeling his own vaguely menacing aura whenever necessary, but rarely has he felt so overtly terrifying as he does here.

Shortly after Björk returns to the big screen — for the first time since 2005’s Drawing Restraint 9 — to remind our hero of his vow, Amleth learns his uncle was exiled from the kingdom he stole and is now lording over a remote patch of farmland somewhere in Iceland. He boards a slave ship bound for Fjölnir’s territory, disguising himself among the human chattel and striking up an alliance with a fellow captive, Olga of the Birch Forest (Anya Taylor-Joy), who offers to lend her cunning to Amleth’s cause. But the vengeance our wayward Viking warrior has dreamed of will not come swiftly; Amleth aims to inflict Fjölnir with a measure of madness before stepping out of the shadows to reveal himself.

After reportedly struggling for years to mount an epic Viking saga of his own, Skarsgård has clearly thrown himself into Eggers’ latest with the full force of his capabilities, and it shows: not only does he look incredible, but he’s operating at the absolute peak of his abilities with a performance that will certainly be among the highlights of his career. He’s well matched by Taylor-Joy, who excels at crafting mysterious and enigmatic characters, and Bang, all regality and stoicism and simmering hatred, makes for an excellent foe. Kidman is used somewhat sparingly, but makes the most of her screentime, especially in some pivotal late-game sequences where the film affords her an opportunity to chew some scenery.

The Northman is steeped in the same attention to detail that left Eggers’ previous films feeling so tangible, and thanks to a reported budget of some $70 million, the work of production designer Craig Lathrop and costumer Linda Muir has never looked more impressive. Cinematographer Jarin Blaschke opts for a grim, muted look that evokes the harshness of the climate and its inhabitants, and the wailing, pounding score from Robin Carolan and Sebastian Gainsborough is a perfect match for the intensity of the onscreen visuals. And what intensity: this is a film where warriors might become possessed by the spirits of wolves and bears, where deadly weapons can only function in the light of the moon, and where a climactic battle is staged on the cusp of an erupting volcano. There are numerous moments that, in the hands of another director, might have felt ridiculous, but Eggers’ depiction of bloodstained funeral rites, prophetic visions and bombastic clashes of sword and shield is so earnest — and often so trippy — that we can’t help but embrace everything The Northman throws at us and still leave the theater thirsting for more.