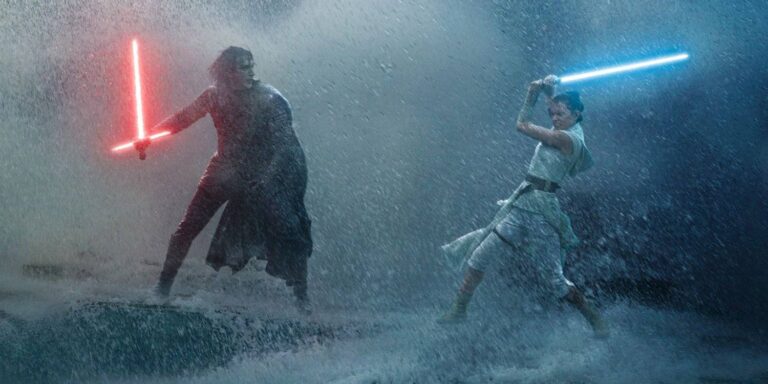 Two years removed from Rian Johnson’s divisive The Last Jedi, director J.J. Abrams returns to the franchise to cap off this latest trilogy with Star Wars: The Rise of Skywalker. Despite complaints from a vocal minority of Star Wars fandom that Abrams’ previous stint at the helm, 2015’s The Force Awakens, hewed much too closely to the framework of A New Hope, his return to the franchise has been cause for celebration among fans who disliked Johnson’s subversive middle chapter. And while Abrams tries to split the difference and land somewhere in between, The Rise of Skywalker swings the pendulum too far into the realm of convention, safety and fan service.

The film begins with perhaps the most exposition-laden opening crawl of the entire nine-film series, and wastes zero time getting into the action, as Kylo Ren (Adam Driver) — the new Supreme Leader of the First Order — carves a path through a battalion of fighters in search of an artifact that will guide him to an uncharted planet once inhabited by the Sith. It’s on this planet where a familiar figure offers Ren the power to crush the Resistance once and for all, provided that he fulfill one simple task: kill the girl.

That girl, of course, is Rey (Daisy Ridley), who trains endlessly in the ways of the Jedi but can’t seem to fully command the Force. “Be with me,” she pleads, levitating above the forest floor as BB-8 patrols nearby, but the knowledge and power of her predecessors remains frustratingly out of reach. When the Resistance learns of the First Order’s powerful new army, Rey defies General Leia Organa (Carrie Fisher) and embarks on a quest to confront Ren, who she still believes can be turned back to the Light — but after murdering his own father, is the former Ben Solo already lost to the Dark Side?

Fan service abounds in The Rise of Skywalker, with beloved favorites like Lando Calrissian (Billy Dee Williams) returning for one last adventure alongside the likes of Poe Dameron (Oscar Isaac) and Finn (John Boyega), and diehards will marvel at the wealth of references, homages and Easter eggs littered throughout the film. Abrams also pays loving tribute to Fisher, utilizing leftover footage from the previous films to ensure Leia remains a pivotal figure in the saga — it’s surprisingly organic and never feels like a gimmick, and seeing the Princess onscreen for the final time is sure to evoke a flood of emotions from the Star Wars faithful.

There’s no denying that Abrams has made a gorgeous film, with lush environments and incredible attention to detail, and the director’s affection for practical creature effects is once again on full display (newcomer Babu Frick is delightful). The action sequences, from large-scale space skirmishes to multiple close-quarter lightsaber clashes to an infantry assault on the deck of an Imperial warship, are among the best of the entire series. Particularly stunning is a pitched battle at sea, with Rey and Kylo Ren trading blows atop floating bits of wreckage as towering waves crash all around — this entire sequence is instantly iconic, with major ramifications on the rest of the film and the arcs of its two central characters.

One of the most important themes of The Last Jedi was the idea of moving beyond the past and no longer remaining beholden to what came before: both Kylo Ren and Luke Skywalker (Mark Hamill) espouse this belief at different points, and Johnson clearly meant this to serve as a metaphor for the Star Wars franchise as a whole. The refusal of the films to follow cues from the novels, comic books and videogames that encompassed the now-defunct Expanded Universe and move beyond the same group of characters and events was already growing stale, but rather than embrace The Last Jedi‘s approach, The Rise of Skywalker regrettably seems to thumb its nose at its predecessor’s philosophy.

Rather than continue to forge a new path, Abrams leans heavily into nostalgia, and although this film doesn’t quite follow in the footsteps of The Force Awakens by mirroring the same beats of an episode from the original trilogy, there are nevertheless a number of similarities between The Rise of Skywalker and Return of the Jedi. From the young Jedi harnessing the teachings of a deceased master to face down impossible odds and hopefully save the galaxy, to the powerful Sith apprentice trying to lure the Jedi to the Dark Side with an offer to rule side by side, to the final desperate battle where victory hinges on a single heroic act, much of this feels like we’ve seen it before.

That’s not to say Johnson’s ideas have been completely discarded. Some of them, like the telepathic link between Rey and Kylo Ren, are further explored and expanded upon in interesting ways, and both Ridley and Driver are phenomenal in their scenes together. Meanwhile, other plot points are clumsily retconned, effectively undoing many of The Last Jedi‘s choices. This necessitates an incredibly frenetic pace during the first half of the film, with the screenplay from Abrams and Chris Terrio attempting to explain away previously established canon, and new information coming so frequently that we scarcely have time to absorb it all, let alone make sense of how it affects or alters the narrative.

For the most part, these changes are an unnecessary divergence from the path laid out by the previous film, likely designed to appease a particular segment of the fandom that felt Johnson’s approach was too radical. And while the instinct to course-correct is a natural response to the kind of offensive, hate-filled vitriol that cropped up in the wake of The Last Jedi, it’s ultimately a detriment that only serves to make The Rise of Skywalker less congruent, less original and less interesting. The film certainly isn’t lacking in thrills, surprises or plot twists, and is unquestionably enjoyable in the heat of the moment — but there are so many missed opportunities and storytelling miscalculations that it all begins to crumble under the slightest scrutiny. The Rise of Skywalker is far from the worst Star Wars film, but as the final chapter in this saga, it should have been much better.

For more on Star Wars: The Rise of Skywalker, read Kyle’s review here.