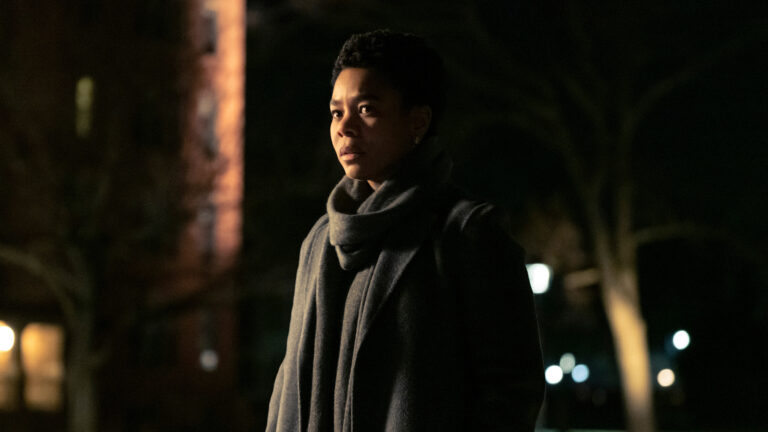 Sundance 2022 is beginning to wind down: praise is being lavished, deals are being made, and the festival is closer to the end than the beginning. Check out the dispatch below for our thoughts on a trio of female-led thrillers, and stay tuned for more coverage of the 2022 Sundance Film Festival throughout the week.

Julia (Maika Monroe) is excited about the prospect of moving to Bucharest while husband Francis (Karl Glusman) seeks to advance his career, but the long hours required by his new position leave little opportunity for romance. There are only so many times one can dress up for a nice meal only to be kept waiting at the table for hours, and the reality of being alone in a strange city where she can barely communicate with the locals turns out to be far less appealing than what Julia had in mind.

Her sense of isolation is palpable, and that’s before she notices the shadowy figure in the window across the street, seemingly watching her every move. When she goes out to the grocery store or to the ramshackle movie theater nearby, Julia becomes convinced a man is following her; is it the same person spying on her from the window? Could it be “The Spider,” the still-at-large serial killer stalking her neighborhood and murdering women? Is it both?

Director Chloe Okuno aims for something Hitchcockian in this deliberately paced tale of paranoia, and Watcher succeeds in fostering an atmosphere of near constant dread. Julia’s dismissive husband and douchebag coworkers all think she’s crazy, which only lends to her frustration and anxiety, but the film goes to some unexpected places when Julia decides to turn the tables and do some stalking of her own. Okuno keeps the plot simmering for longer than some audiences may hope, but Monroe’s magnetic screen presence keeps us invested and the bloody, white-knuckle conclusion is a solid payoff.

After premiering her feature-length directorial debut at last year’s festival, Rebecca Hall is back in front of the camera for her return to Sundance, headlining Andrew Semans’ unsettling psychological thriller Resurrection. Hall portrays Margaret, a successful pharma executive whom we first meet as she gives advice to a subordinate struggling with a toxic relationship. Margaret’s plainspoken words of wisdom establish her as caring but perhaps a bit insensitive, a feeling echoed by her interactions with teenage daughter Abbie (Grace Kaufman).

When Margaret attends a work conference and spies a familiar face on the other side of the room, she has a full-blown panic attack. She hasn’t seen David (Tim Roth) for more than twenty years, but now he’s popping up in the local shopping mall or while she takes a stroll through the park, always at a distance that allows him to plausibly deny that he’s following her. There’s some history there, the details of which are laid out in a stunning single-take monologue that Hall delivers to the same intern who solicited Margaret’s advice at the beginning of the film – I’ll not spoil the specifics here, but the incredulous look on the face of her coworker will likely be an exact match for the facial expressions of audience members trying to wrap their heads around what they’ve just learned.

There are few actresses more adept than Hall at portraying a woman whose sanity is slowly unraveling, and her performance in Resurrection is no exception. She’s well matched by Roth as the sinister creep hiding behind a veneer of warmth and congeniality, slowly revealing the depths of his depravity as he sinks his hooks into Margaret. Semans takes some huge swings during the final act, and we’re never quite sure if the horrific onscreen events are truly happening or if they’re meant to serve as metaphor, but there’s no denying the grisly imagery will be seared into our brains for a long time to come.

Writer-director Mariama Diallo’s Master is set at the fictional Ancaster College, a liberal arts school purportedly even more prestigious than Harvard, where Gail Bishop (Regina Hall) has just been appointed as “master,” a position closely in charge of student life. Gail’s ascension is historic in that she’s the first person of color to hold the office, a major milestone considering both the faculty and student body are nearly devoid of Black faces, the other two exceptions being incoming freshman Jasmine Moore (Zoe Renee) and Liv Beckman (Amber Gray), a professor and longtime friend of Gail under consideration for tenure.

Both Jasmine and Gail are immediately beset with microaggressions from their all-white classmates and colleagues, respectively, but the specter of racism isn’t the only phantom haunting these hallowed halls. Ancaster was allegedly built on the site where a woman was executed over accusations of witchcraft, and Jasmine has been assigned to the same dorm room where Ancaster’s first-ever Black student committed suicide after claims she was being tormented by the witch.

Shadowy hallways and dusty storage rooms make for atmospheric setpieces, and both Hall and Renee are convincing in their unease (if not outright terror), but the fairly rote supernatural scares often detract from the narrative, rather than serving its themes. The institutional racism permeating every nook and cranny of Ancaster is frightening enough without muddying the waters, and Master feels like two films increasingly at odds with each other. The final act, which includes a tragic fate for one character and a late-game revelation about another’s identity that may or may not be true, is too mired in ambiguity to be effective, and the overall experience feels less than satisfying.