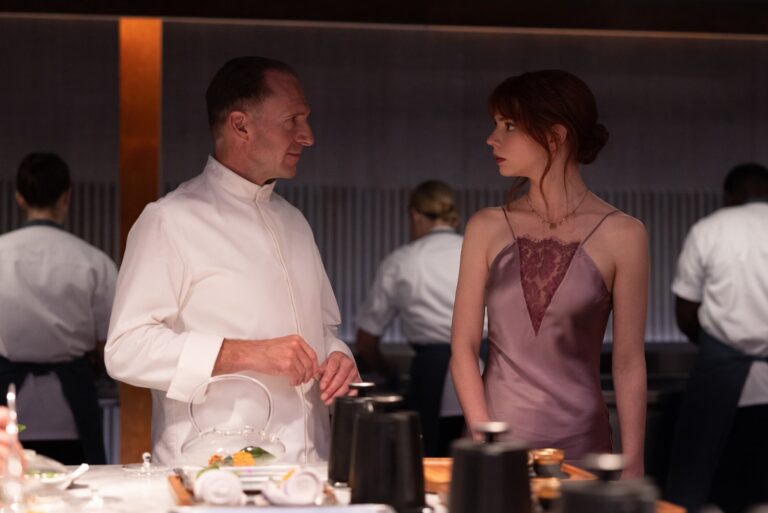 An evening of fine dining at the most exclusive of eateries turns into something horrific in Mark Mylod’s The Menu, a delectable sendup of snobbish “foodie” culture and the ultra-wealthy elites that frequent $1200-a-plate restaurants like the film’s fictional island destination, Hawthorn. The hand-picked guest list is full of detestable personalities, including a vicious food critic (Janet McTeer) and her yes-man editor (Paul Adelstein); a past-his-prime movie star (John Leguizamo), self-described as “a name-dropping whore;” and the insufferable Tyler (Nicholas Hoult), possessed of the sort of zealotry rarely seen outside of religious extremism.

The object of Tyler’s worship is celebrity chef Julian Slowik (Ralph Fiennes), proprietor of Hawthorn and curator of tonight’s exclusive menu. Tyler hopes for nothing more than to make a good impression on his idol, but his first faux pas comes before the evening begins: his date, Margot (Anya Taylor-Joy) wasn’t invited, and Hawthorn isn’t the sort of establishment that offers substitutions, for its accompaniments or its guest list. Slowik’s stalwart assistant, Elsa (a scene-stealing Hong Chau) ultimately acquiesces, but it’s clear Margot’s presence isn’t welcome on the island.

To her credit, Margot isn’t exactly thrilled to be here, either. She enjoys food just as much as the next person, but the theatricality and exclusivity leave a bad taste in her mouth, and she has no qualms about telling Tyler — or Chef Slowik himself — exactly how she feels about the absurd pretentiousness of it all. While Tyler and the other guests marvel over the “genius” of Slowik serving a bread course with accompaniments and no actual bread, Margot rolls her eyes; as far as she’s concerned, her fellow diners are idiots, and their host is a pompous asshole so focused on the artistic nature of fine dining that he’s forgotten one crucial truth: eating should be fun. But fun is nowhere to be found on Slowik’s menu, especially for these particular guests, and the main course is something far more sinister.

Mylod is no stranger to mining humor from the misadventures of ultra-wealthy misanthropes (he and co-screenwriter Will Tracy both have credits on HBO’s Succession), and The Menu‘s satire is as sharp as the knives in Lowik’s kitchen. Fiennes is pitch perfect as the magnetic megalomaniac pulling the strings — if Gordon Ramsey or Anthony Bourdain were cult leaders, they would probably look something like this — and Taylor-Joy is wonderful as the wild card, the uninvited guest from a working class background who refuses to play by Slowik’s rules. Margot is the one aspect that Slowik never accounted for when his meticulous plans were made, and the cerebral game of cat and mouse that plays out between these two characters against the backdrop of increasingly deranged events is absolutely delicious. Savagely funny from start to finish, The Menu is a master class in pitch black comedy and one of my favorite films of 2022.