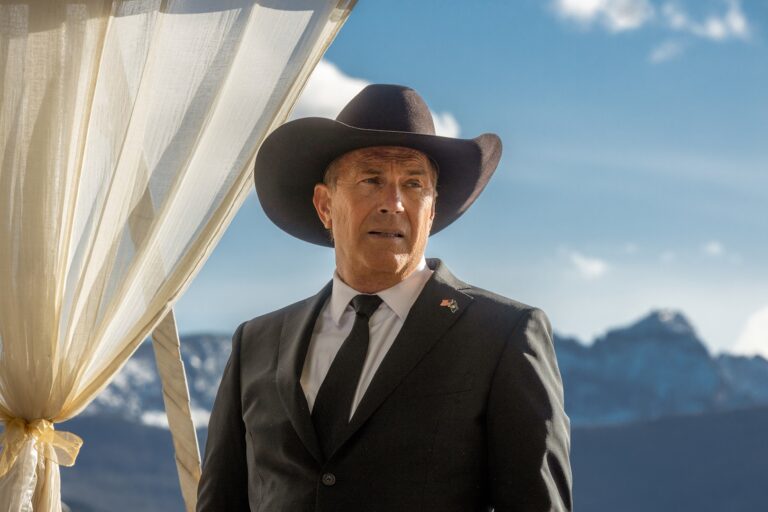 When audience last left Yellowstone at the end of Season 4 earlier this year, John Dutton (Kevin Costner) shocked the state of Montana by announcing his run for governor with the added bonus of once again effectively crushing the aspirations of his downtrodden adopted son Jamie (Wes Bentley). Season 5 knows viewers have had their fill of elections and skips right to, you guessed it, John Dutton’s victory speech, setting the stage for political intrigue and a looming battle for the very existence of The Dutton Ranch.

Paramount Network provided us with the two episode premiere of Yellowstone Season 5 and fans can expect another slow burn start. The first hour, titled One Hundred Years is Nothing, focuses heavily on the political world and the challenges John will face in office. While it’s definitely trying something new to break the formula all these seasons in, John is a better character with boots on the ground at the ranch. Costner still shines with his take-no-bullshit gravitas and the pencil pushers in the government satisfyingly get his wrath this season. The show also wisely seems to be leaving real world political issues out of the story, making the conflict just about the preservation of Montana from the rich out-of-state tourists that make the land their play area.

Action on The Dutton Ranch in One Hundred Years is Nothing is minimal and mostly relegated to a flashback involving an early interaction between a young Beth and Rip. Adult Beth (Kelly Reilly) spends most of the episode feeling bad and apologizing for how she treated Rip (Cole Hauser) when they were kids, but also making sure to fit in consistently taking harsh jabs at Jamie. Reilly’s performance continues to be strong while walking a tightrope between badass and making Beth just plain unlikable as a character – the flashback also doesn’t help the character’s likability factor. The real highlight of the first hour comes at the victory party hosted at The Dutton Ranch and, in a rare moment, sees the entire cast come together in the same location for a positive event. Enjoy it while you can because the hour ends in true tragic Yellowstone fashion.

The second episode, titled The Sting of Wisdom, spends its early moments dealing with The Duttons coming to terms with the sad outcome of the previous hour. Kayce (Luke Grimes) and Monica (Kelsey Asbille) get some needed focus after being relegated to the C-plot in the first episode. Despite Monica not always being received well by fans, the character is well written in this episode and Asbille turns in a solid performance, while Grimes is also reliably stoic and strong.

Things also heat up with the Market Equities team as John wages open war on their resort plans, prompting Caroline (Jacki Weaver) to call in specialist Christina (Katherine Cunningham) to disrupt The Dutton family – with direct crosshairs on the obviously already dismayed Jamie. Christina, in many ways, feels like the corporate equivalent of Beth with the same penchant for openly using her sexuality as a weapon and having zero filter on her thoughts. Jamie might be in for another world of hurt this season.

The Sting of Wisdom thankfully brings more of the story back to The Dutton Ranch with the return of a visibly more mature Carter (Finn Little) and also some dire events featuring a critical mistake made by the Ranch Hands in the final half of the hour that could have serious fallout for the ranch. Ranch Hand Ryan (Ian Bohen) seems to be getting a story push in both episodes and Bohen does a good job in the role that could be poised as a breakout character this season. Sadly, Cole Hauser’s Rip is great in his moments here, but isn’t central to any of the major plots in these episodes, begging the question of what his arc will be in Season 5.

John Dutton’s major sentiment in both episodes is a fear that spending significant time away from the ranch is integral for the future of Montana, but in the end may actually cost him the ranch itself. These episodes also instill that fear in me as a Yellowstone viewer. The government aspects don’t have the raw beauty and drama of time spent on the ranch and having Costner play House of Cards isn’t exactly the core of what makes this show work. The first two episodes hit some solid notes, but the series will need to find the right balance of storylines for its main characters to keep Season 5 from being a down one.

Yellowstone Season 5 premieres on Sunday, November 13th with back to back episodes at 8pm ET/PT on Paramount Network.