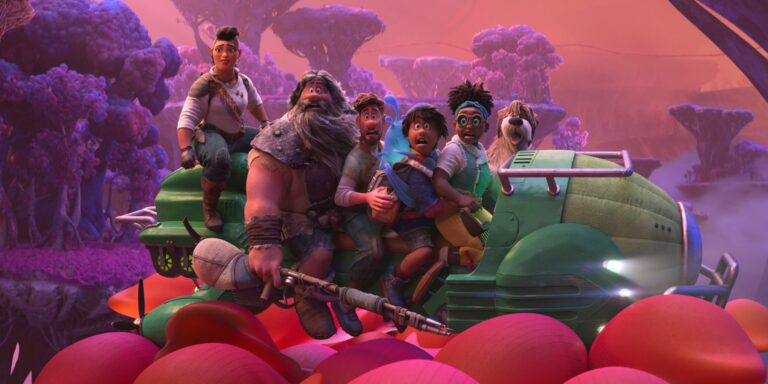 Revered across the land of Avalonia for his discovery of an energy-producing plant that paved the way for advanced technology, bettering the lives of pretty much every living person in the process, Searcher Clade (Jake Gyllenhaal) is something of a living legend. In fact, fame is something of a family trait: his father was the world-renown explorer and adventurer Jaeger Clade (Dennis Quaid), and Searcher’s teenage years were spent trying to live up to his father’s lofty expectations. But the younger Clade’s predilection toward plants instead of peregrination ultimately drove a wedge between father and son, and Jaeger vanished some 25 years ago on a mission to explore beyond the mountains that encircle their homeland.

These days, Searcher is content tending crops alongside his teenage son Ethan (Jaboukie Young-White), who would much rather be playing the latest version of a tabletop RPG that he and his friends are enamored with. Granted, that would also force Ethan to work up the courage to chat with the boy he’s crushing on, so maybe staying on the farm is the safer option. But both Clades find themselves thrust headlong into adventure — alongside family matriarch and resident pilot Meridian (Gabrielle Union) — when Avalonia’s energy source begins to falter, and Searcher is tasked with venturing below the planet’s surface to determine what’s gone wrong after so many years of utopia.

Walt Disney Animation Studios doesn’t dabble in sci-fi very often, but here’s hoping Strange World is a precursor to more genre experimentation, because the eye-popping visuals of its subterranean wonderland are a delight to behold. From bipedal landmasses to floating creatures that look like a cross between pancakes and manta rays, from gelatinous monstrosities with dozens of tentacles to bioluminescent plant life that looks like Avatar‘s planet of Pandora as seen through the eyes of Dr. Seuss, Strange World boasts some of the most original and inventive visuals of any film in the studio’s catalog. The unconventional design choices extend all the way to the requisite adorable sidekick, a blob of blue-hued goo that Ethan dubs “Splat” and which will likely generate some decent merchandise sales (one of the film’s supporting characters even makes a joke about this).

Directed by Don Hall and Qui Nguyen, reteaming after their work on last year’s Raya and the Last Dragon, the film leverages its bonkers aesthetic to create some memorable action sequences, which somewhat overshadow the conflict between its three generations of Clade men (Jaeger reappears around the halfway mark). The voice cast does great work with the material they’re given — Quaid is especially good as the boastful pathfinder — but the breakneck pacing leaves little time for audiences to appreciate the more emotional beats before rushing onto the next exciting moment. As it stands, the themes are sketched in well enough to be recognizable, but lack the sort of depth we’ve come to expect.

That’s not to say Strange World isn’t a ton of fun; on the contrary, it’s an absolute blast, but feels as though it doesn’t quite resonate in the way that it should have. Then again, this is a film whose conflicts stem from not being able (or willing) to meet expectations that have been thrust upon you unfairly, so perhaps we should endeavor to appreciate what it actually does, rather than fussing over what we hoped it might accomplish.