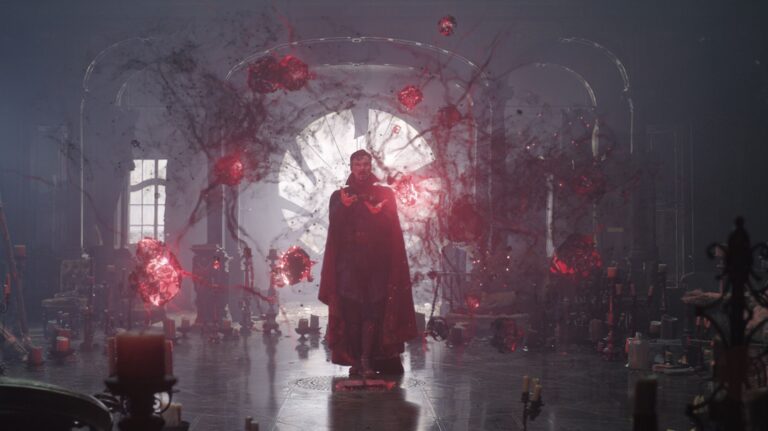 Serving as both a solo-titled sequel for Doctor Strange (Benedict Cumberbatch) and a direct continuation of Wanda Maximoff’s (Elizabeth Olsen) story from the excellent Emmy-nominated Disney+ series WandaVision, Doctor Strange in the Multiverse of Madness enlists beloved director Sam Raimi (Spider-Man, Evil Dead) to bring his unique horror style to the MCU after replacing original director Scott Derrickson (Doctor Strange) – who cited “creative differences” in his departure from this project.

The madness begins when America Chavez (Xochitl Gomez), a MacGuffin from another Earth, interrupts an emotional moment for Doctor Strange with pure chaos, only to reveal someone is scouring the entire Multiverse to capture her at any cost. It doesn’t take long for Strange to confront Wanda aka The Scarlet Witch, still grieving over the loss of her magically created two sons (it’s complicated), and outing her bid to use America’s unique power set to rewrite the Multiverse in order to restore her family.

Let’s be clear right out of the gates: Doctor Strange in the Multiverse of Madness is a messy, messy film and clearly the result of two directors with different visions trying desperately to make a cohesive movie; they did not succeed. The tone is a muddy hodgepodge of campy, dark and straightforward superhero adventure with sections of it feeling pulled from an entirely different film. The visuals are unusually bad (rushed?) for a Marvel Studios film in numerous large scenes, especially in the first act, and are often punctuated by dialogue so clunky it might’ve been penned by George Lucas.

But all is not lost, mostly due to a second half that unleashes Raimi’s true mayhem-inducing talents in a non-stop barrage of monsters, bloodshed and unexpected surprises. What Raimi does with the Scarlet Witch alongside Elizabeth Olsen — once again going all in with the role — is a roller coaster of horror giddiness, and a definite first for the MCU. Some of Raimi’s signature camp feels a bit out of place in this setting, but his visuals and thrill-a-minute scares are on point.

Running from said horror is Doctor Strange, America and a variant of Christine Palmer (Rachel McAdams), saddling the good Doctor once again with another precocious superpowered teen with Multiverse issues (see Spider-Man: No Way Home), but doesn’t feel quite so satisfying this time. America is likable enough as a character, but she’s no Peter Parker and the attempted bond with Strange feels only necessary for driving the plot forward, and not something truly organic for these characters.

Adding to the positive side, there’s a game-changing scene midway through the film that finally gives this odd flick a sense of style and purpose, surely making fans lose their minds at some major geek-out moments. Marvel Studios has once again done a wonderful job of keeping some big secrets under wraps to reward audiences with jaw-dropping reveals. But after the adrenaline wears off, it’s unclear if Feige and the MCU braintrust meant for these moments to establish a bigger picture, or were merely just cashing in to give people surprises and really crazy sequences to talk about afterwards.

Unfortunately, Doctor Strange in the Multiverse of Madness feels like somewhat of a letdown considering many, including myself, expected it to usher in a new era of the MCU, setting the stage for what comes next. Also, despite being a huge selling point, the exploration of the Multiverse is disappointingly limited. Instead, this fun but wildly inconsistent film does menial change to the characters or the universe, leaving the MCU’s Phase 4 still with no major sense of direction.