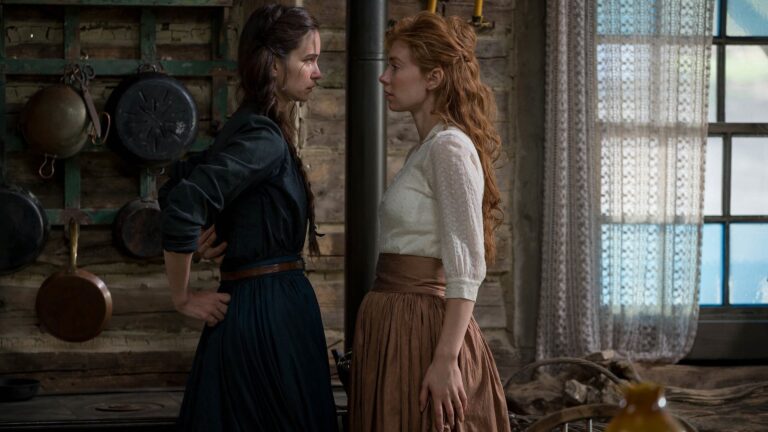 “With little pride and less hope, we begin the new year.” While those words could adequately characterize a more recent time period, in the case of The World to Come they’re written by farmer’s wife Abigail (Katherine Waterston) at the beginning of 1856. She and husband Dyer (Casey Affleck) mourn the loss of their young daughter after a brutal bout of diphtheria, and while Dyer continues about his daily tasks with a sense of dutiful purpose, Abigail struggles to make it through each day, finding solace only in her journal.

“My self-education is the only way to keep my unhappiness from overwhelming me,” she writes, but a new distraction presents itself in the guise of Tallie (Vanessa Kirby), recently settled on a patch of land nearby with her prickly husband, Finney (Christopher Abbott). Tallie arrives on Abigail’s doorstep seeking solace — she can’t stomach the slaughtering of animals currently underway at her own farm — and the two women find a sort of kinship in one another, with the quiet, reserved Abigail entranced by Tallie’s carefree, somewhat reckless nature.

The more time she spends with Tallie, the more Abigail feels something unfamiliar stirring within her, both exhilarating and terrifying at the same time. Tension hangs in the air whenever they’re in the same room, but Abigail’s timidity won’t allow her to speak her true feelings aloud, until Tallie — clearly attuned to the conflict raging inside Abigail — gently presses the issue. “Every morning I wake and think I never want to be far from you,” Abigail admits, and what follows is best described by the words she scribbles in her diary: “astonishment and joy.”

Alas, the joy is destined to be short-lived, as both husbands grow increasingly wary of the time their wives spend with each other. Dyer isn’t the sort to make accusations, preferring to mark his suspicion in more indirect fashion, but Finney — having kept record of the frequency and length of his wife’s visits — berates Tallie for shirking her responsibilities, both in the kitchen and in the bedroom, using his narrow interpretation of the Bible as justification for the harsh discipline he employs.

Originally premiering at the 2020 Venice Film Festival, where it won the Queer Lion award for Best LBGT film, director Mona Fastvold’s The World to Come arrives at Sundance 2021 en route to a mid-February release through Bleecker Street. Adapted from a short story by Jim Shepard, the film makes liberal use of Abigail’s journal entries — narrated by Waterston in voiceover — to establish an alluring sense of poetry as Abigail explores feeling for which even someone as intelligent as she scarcely has the words to describe. The thrill of romance — something clearly missing from both marriages — is dampened only by the constant threat of discovery, where the snapping of twigs in the forest or the sound of a dog’s feet on the floorboards can give rise to panic.

There’s an argument to be made that danger is part of the appeal, at least on the part of Tallie, who seems to relish playing with fire and knowing that it could all come crashing down at any moment. Abigail, to her credit, seems to feel guilty about her lack of affection for Dyer, and the toll it has clearly taken on him — “contentment is like a friend he never gets to see,” she writes — but the guilt does little to deter her from continuing down the same path, even as it grows all the more precarious.

A hauntingly beautiful story anchored by passionate, soulful performances from Waterston and Kirby — the latter of whom is garnering some well-deserved Oscar buzz for her role in Pieces of a Woman, currently streaming on Netflix — The World to Come is a heart-wrenching rumination on grief, loneliness and desire, with a smoldering connection between its two leads.