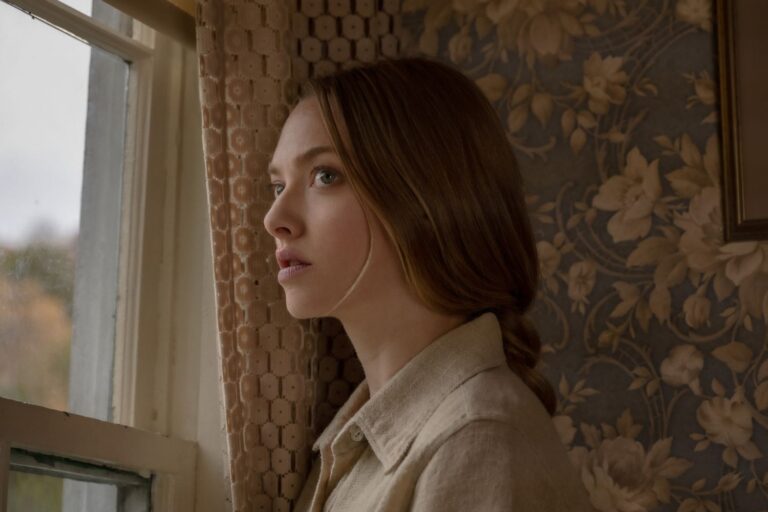 After garnering an Oscar nomination for her portrayal of Hollywood starlet Marion Davies in last year’s Mank, Amanda Seyfried is back on Netflix for Things Heard & Seen, a gothic ghost story that adapts Elizabeth Brundage’s acclaimed novel All Things Cease to Appear. Set in the Hudson Valley region of New York in the year 1980, the film blends supernatural elements with marriage drama for a unique spin on the haunted house genre.

An artist and self-proclaimed “city girl,” Catherine Clare (Seyfried) isn’t exactly thrilled with the notion of moving to the sleepy little town of Chosen, NY, but with husband George (James Norton) landing a teaching position at a nearby college, she feels obligated to acquiesce. Along with their young daughter Franny (Ana Sophia Heger), the Clares settle into a century-old house on a dilapidated dairy farm outside of town, where Catherine immediately begins to sense something amiss. The nightlight in Franny’s bedroom flickers, the ancient piano in the living room plays music by itself, and Catherine frequently smells exhaust fumes when lying in bed at night. Then there’s the matter of the strange apparition that manifests in the upstairs hallway, and the ancient Bible she unearths, whose last owner has their name scratched out, along with the inscription “damned.”

George, too busy soaking up the adulation of his mostly female students — not to mention pursuing a dalliance with a local horse trainer (Natalia Dyer) — dismisses Catherine’s fear as little more than her imagination getting the better of her. Every question or concern is shrugged off, batted away, or twisted into being her own fault; the most frightening thing in the Clare household isn’t the presumed spirit of its previous inhabitant, it’s George’s adeptness at gaslighting Catherine and using her insecurities to control her. She finds solace in her husband’s colleagues, free-spirited Justine (Rhea Seehorn) and kindly department head Floyd (F. Murray Abraham), but as the truth about the home’s former owners comes to light, George’s web of secrets threatens to unravel.

Directors Shari Springer Berman and Robert Pulcini, who co-wrote the adaptation, wisely focus more on the chilling realities of the Clare marriage than the otherworldly presence lurking inside the house. That’s not to say Things Heard & Seen doesn’t offer its share of frights, but the film uses these moments to magnify the mounting problems between the couple: Catherine’s sense of loneliness and isolation threatens to drive her mad, while George’s constant need to control the narrative — both inside and outside of the home — push him into increasingly dark territory.

Norton channels some serious Talented Mr. Ripley vibes, painting a vivid portrait of a narcissistic sociopath, quietly seething with rage when someone deigns to challenge him — especially if that someone happens to be a woman. Seyfried, of course, remains eminently watchable, bringing her A-game to an underdeveloped character and providing an emotional conduit for the audience. The paranormal trappings provide some nice set dressing, but the personal conflict at the center of Things Heard & Seen proves to be its most compelling feature.