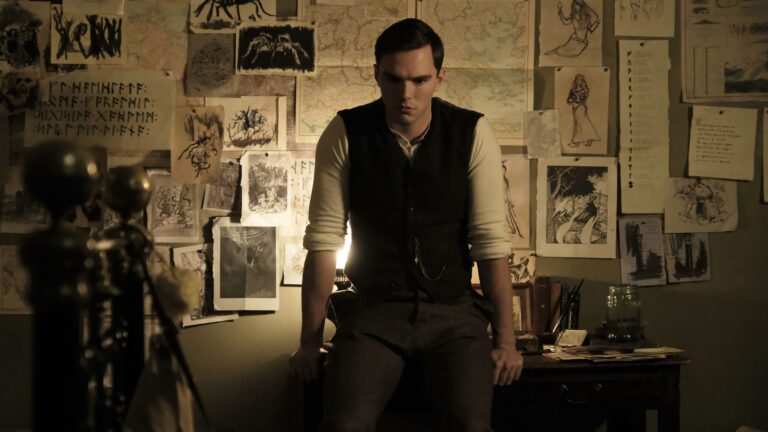 A period drama about the early years of the celebrated author who penned The Hobbit and The Lord of the Rings, Tolkien stars Nicholas Hoult as the titular writer, to whom we’re introduced on the battlefields of World War I. Exhausted and feverish, he crawls through muddy, gas-filled trenches frantically searching for Geoffrey Smith (Anthony Boyle), a childhood friend that has gone missing during the chaos.

Finnish filmmaker Dome Karukoski wastes little time evoking some of the iconic imagery associated with Tolkien’s work, as the hero’s fragile state of mind in the midst of a bloody, brutal war gives way to hallucinations. Shadowy ring wraiths appear to cut down hordes of Tolkien’s fellows, enemy soldiers wielding flamethrowers become dragons spewing fire, and through the smoke and fog we see the unmistakable silhouette of Sauron rising up from the horizon. It might be interesting if it all didn’t feel so ham-fisted.

Flashbacks to Tolkien’s youth fare better, tracking his days at school with a group of equally gifted and ambitious friends that christen themselves “the Tea Club and Barrovian Society,” or TCBS for short. The chemistry and camaraderie among this quartet feels wonderfully authentic, even when the film goes out of its way to cram another painfully obvious reference into the dialogue, with one character fervently describing the group as a “fellowship.” If you’re looking for subtlety in David Gleeson and Stephen Beresford’s screenplay, expect to come up short.

The requisite romance, between Tolkien and a fellow boarder named Edith (Lily Collins), is sweet when it’s allowed enough time to breathe, but even these interactions are often derailed by a seeming inability to resist winking at fans. When the young couple are unable to attend a performance of Wagner’s “Ring” cycle, they sneak into the basement of the theater where they’re still able to hear the music from above, and slow dance the evening away. It’s a beautifully tender moment, marred by the script’s most blatant and cringe-worthy acknowledgement — not just of Tolkien’s own work, but of Peter Jackson’s adaptation of such — as a character says, with all sincerity, “it shouldn’t take six hours to tell a story about a magic ring.”

Hoult is earnest and genuine enough in the leading role, though not immune to overplaying his hand a bit when the narrative calls for a drunken Tolkien to wander the courtyard in the middle of the night, bemoaning his fate while simultaneously showcasing his skills as a linguist. This, like much of the film’s pivotal moments, feels more like a contrivance than an accurate portrayal of the real-life events — and this is perhaps the biggest failing of Tolkien. By repeatedly conjuring unbelievable scenarios and constantly drawing parallels between its subject’s life and the works which would later define him, the film ultimately does a disservice to his memory.