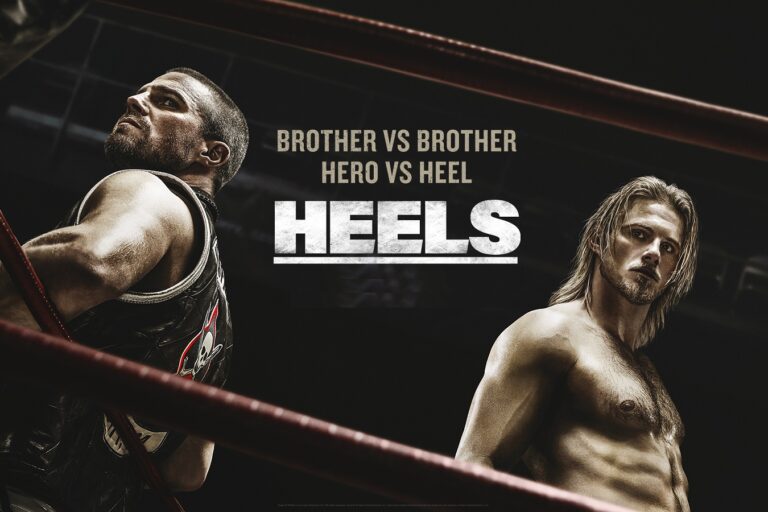 The new scripted Starz dramatic series Heels is looking to capitalize on the inherent drama built into professional wrestling by bringing this larger-than-life world to the struggles of small town life. Starring Stephen Amell (Arrow) and Alexander Ludwig (Vikings) as warring brothers butting heads for their father’s legacy, the series does for pro wrestling what Friday Night Lights did for small town football. It’s instantly addicting and one of the best new dramas of the year.

Heels revolves around a large ensemble of colorful characters brutalizing their bodies for glory in the Duffy Wrestling League in the namesake, close-knit Georgia town. Jack (Amell) and Ace (Ludwig) Spade are wrestling legacies who inherited the league from their father when they unexpectedly lost him. Jack carries the burden of running the day-to-day as well as writing all the match scripts and playing the “heel” or villain, while Ace plays the “face” (aka the hero) that draws in the crowds and represents the whole of the DWL. Soon the boys find their already struggling business under fire as a well-funded, brutally violent wrestling company from a neighboring state looks to run the DWL out of the region and divide the brothers.

I’ve followed both Stephen Amell and Alexander Ludwig’s careers since their first high profile gigs and had the opportunity to meet both multiple times, so it comes with a modicum of satisfaction to see how far both have developed in their careers and how far their acting skills have strengthened – and they’re doing it together on this show. Both actors are doing the best work of their respective careers in Heels, especially Amell who wears the weight and pain of this life on his face, while still just speaking sternly and calm.

The supporting cast is full of memorable characters to pad out the B-plots, but none stand out more than Chris Bauer (True Blood) as the crude, egotistical wresting veteran Wild Bill Hancock. In true “heel” fashion, Wild Bill is easy to hate as the devil on the Spade brother’s shoulders, but even easier to love because of his constant outbursts and unpredictability. Mary McCormack is also doing strong work here as Willie Day, the hard-nosed second-in-command of the DWL who has been a part of the business since the Spade brother’s dad created it.

Wrestling fans will love the inside terms and realistic look behind the curtain, while the series gently eases common viewers into these ideas over the course of the episodes. All the actors are 100% believable in their roles from their physiques to the promos on the mic. Never once does Heels or its actors feel like a cheap recreation of the wrestling world and that credibility is a testament to how hard everyone worked on the series. A special round of kudos to Kelli Berglund as Crystal Kelly who not only gives a star-making performance, but works her ass off as the only woman taking bumps inside the ring in the DWL.

There are plenty more fantastic performances and supporting arcs including the “aw, shucks” good guy Bobby Pin’s (Trey Tucker) shot at the big time or Rooster Robbins (Allen Maldonado) growing racial frustrations having never been given the belt, or the absolutely bonkers Chris Gully (Mike O’Malley) from the rival league as he attacks on multiple fronts. Not all the supporting characters work, however: Jack’s wife Staci (Alison Luff) becomes grating as the season progresses going from a strong, likable partner to the stereotypical nagging wife.

Starz was kind enough to give us all eight episodes of the first season and it’s a helluva ride from start to finish. The finale is near perfect, culminating multiple arcs from the season in satisfying fashion while setting up plenty of revenge for Season 2. Heels captures all the backstabbing and raw power that makes pro wrestling so compelling, and the cast and crew have recreated that world beautifully in this wildly entertaining small town drama.