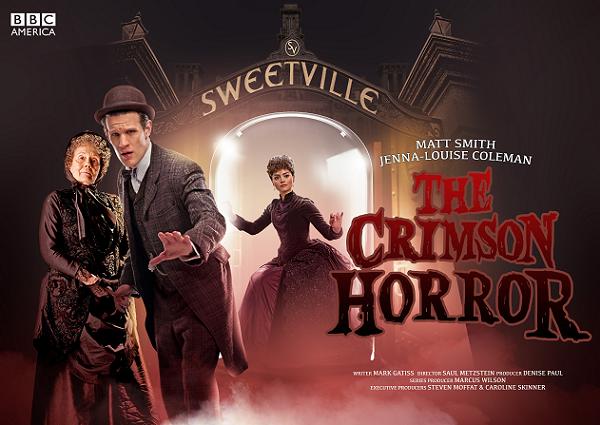 Well this was a batshit crazy episode wasn’t it? Writer Mark Gatiss (Sherlock) gets his second episode of Doctor Who and delivers some fairly enjoyable results, but certainly one of the weirder episodes in an already weird show.

It’s kind of hard not to enjoy a Victorian episode of DW that also includes Vastra, Jenny and Strax and that’s what we get with The Crimson Horror. Am I the only one that wants those three to either a) become the new companions or b) get a spinoff? There’s just something about the dynamic and chemistry between that trio that feels like lightning in a bottle.

The detectives are brought onto the scene while investigating the town of “Sweetville” after seeing a photo of The Doctor seemingly burned into the retina of a dead man. Jenny heads to the town to find The Doctor and we meet Mrs. Gillyflower (Game of Thrones’ Dianna Rigg) who runs “Sweetville” with her mysterious and never present partner Mr. Sweet. Jenny eventually discovers The Doctor held prisoner while being nearly petrified with red skin in factory full of red liquid.

Things just get stranger and stranger as it turns out Mrs. Gillyflower’s blind daughter has been keeping The Doctor as a pet and calling him “Monster.” Oh and that mystery partner of Mrs. Gillyflower? An ancient red leech monster that is currently attached to Mrs. Gillyflower’s chest and hidden out of sight the whole time. Apparently Vastra and her people had dealt with this particular “infection” back in prehistoric times but Mr. Sweet had intentions of using the smokestacks to send the liquid out to infect all humanity and bring back his leech-y brethren.

Clara is strangely a non-factor in this episode and doesn’t serve any real purpose (other than being a damsel in distress) until she gets something relevant to do in the final scene of the episode. Speaking of the end, I hope Moffat and Co. know what they’re doing because bringing two (annoying) kids onto the TARDIS as companions (hopefully short-term) sounds like an awful idea. Sure this next episode, penned by Neil Gaiman, is set in an old amusement park so having kids around makes sense, but beyond that? We’ll have to wait and see considering we’re nearing the end of this series.

The return of Vastra, Jenny and Strax! The humor. The practical leech effects. Diane Rigg chewing the scenery.

Plot is about as weird as it gets. A lot of it didn’t make sense in the context. What happened to fun/cool Clara? Oh no, don’t tell me the kids Clara nannies are going to…yep…

The Crimson Horror is original and at times extremely entertaining but is just too bizarre and uneven to be one of the better episodes of this show.