TV REVIEW – ‘Doctor Who’ – “Journey to the Centre of the TARDIS” 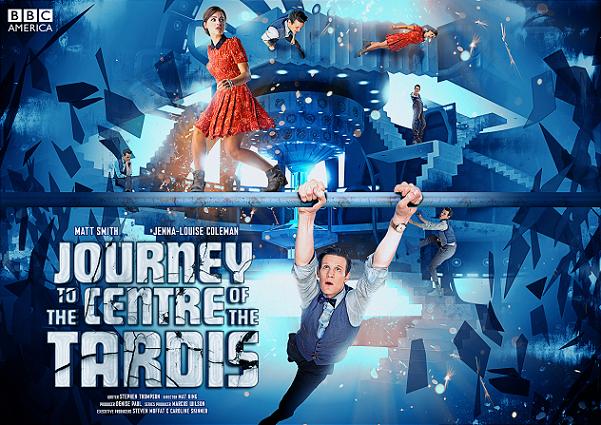 Journey to the Centre of the TARDIS was the first episode in Season 7b that I had metaphorically circled on my list as one that I was really excited above others to watch. There’s space pirates/salvagers and they capture the TARDIS? And The Doctor and Clara and the salvagers are trapped and forced to explore the innards of the TARDIS before it goes BOOM with everyone inside? Sign me up. Twice.

So with that in mind, maybe that’s why I was so disappointed with the final result… bummer, right? The title alone is an homage to the Jules Verne tale which elicits an adventure! An exploration! But what you get is a dour episode that’s bogged down by ludicrous characters and dark, dank scenes around the TARDIS while invoking the “monster is stalking you” sequences that have been done quite a bit already this series.

The salvagers are all brothers looking for the big score, and they have a secret that is so ridiculous and insulting when revealed I don’t know if you should hate the characters or the writer more. Scratch that. Hate the writer. Bad writer. Bad! Not to mention little things that irked me, like how just last week in Hide the TARDIS could communicate by hologram, but this week it is completely silent when verbal communication was of dire necessity.

Also much to my concern in the recent episodes, in Journey to the Centre of the TARDIS Clara continues to be downgraded into a less intelligent and less endearing character for no discernible reason. Not sure if it’s a conscious decision by Moffat and the writers, or just a product of the stories being told the last few times out, but this isn’t quite the fun spunky gal of the first couple of episodes.

Although it’s not all bad – while most of the interior TARDIS scenes are dank and dark, some really showed the wonder and majesty that exists inside. Also, there’s some major advancement in The Doctor and Clara’s relationship with some important things being confessed to each other and they seem to be in a better place at the end of this episode. There’s also some fun timey-wimey stuff going on with overlapping timelines that make for some interesting and almost really clever scenes.

A premise with so much potential really feels botched with Journey to the Centre of the TARDIS and it sticks out as the first real failure of Series 7b. Episodes revolving around the TARDIS itself are used sparingly and for special storylines, therefore doing episodes like this one cheapen the mystique of the TARDIS rather than reserve these tales for major series moments.

The Doctor and Clara finally being fully honest with each other. The timey-wimey stuff. The larger scale TARDIS rooms.

The salvage brothers. The awful reveal of their secret. The monster stalking in dank dungeon hallways aesthetic. The wasted premise.

A messy installment that was all over the place and squandered a really cool premise while missing the key ingredients of fun or adventure essential to this type of episode.