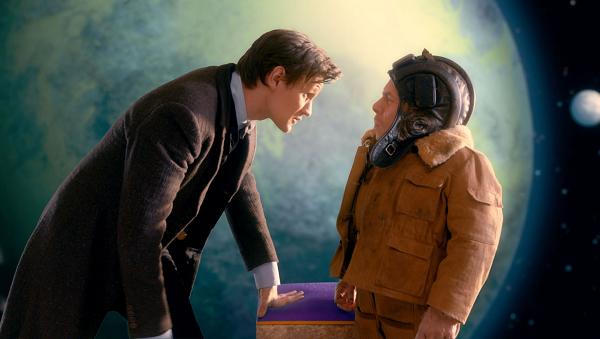 Neil Gaiman returns to pen another adventure in the Who-verse and comes away with another solid outing with his Series 7 debut, Nightmare in Silver. Last series he wrote the fan-favorite and Hugo award-winning episode The Doctor’s Wife, and was lured back again this series with the enticement of getting to bring back arch-villians The Cybermen (for more on this, check out the discussion I took part in with Neil here).

As is normally the case with Gaiman’s stories, this episode takes place in a very exotic and visually interesting locale. The Doctor, Clara and her nanny kids (*sigh*) go on an excursion to “Hedgewick’s World of Wonders,” the now shutdown but largest amusement park in the galaxy. The planet was once smack-dab in the middle of the Cyber-Wars and unbeknownst to The Doctor still has some of the silver behemoths lying dormant in the destruction… and they’ve started to upgrade.

Nightmare in Silver is a great time on many levels. The legendary Warwick Davis (Star Wars, Willow) is quite good as Porridge, a refugee still living in the abandoned park that hides inside an old Cyberman and works the controls (sort of like Kenny Baker did as R2-D2 in the aforementioned franchise) to con the random visitor. He plays the role with a calm restraint that shows a lot of poise and pays off later in the episode when you find out his back story.

But you just want to know about crazy robots, don’t you, dear Whovians? Gaiman was tasked with making the Cybermen scary again and does so nicely with a revamped design, increased speed, and a whole other “species.” These new Cybermen are fast! Which might actually spur some nerd debates similar to that with zombies: which are better, fast or slow? In addition we get introduced to Cyber-mites which are creepy little worm looking guys that can infect and upgrade with much greater ease than the slower more painful process of the old full-bodied Cybermen. Really, it’s all very cool.

Unfortunately throughout the episode we’re forced to deal with Clara’s nanny kids Artie (Kassius Carey Johnson) and Angie (Eve De Leon Allen) whom are your textbook whiny annoying TV children. I get that it makes more sense to do an amusement park episode with kids involved but they were pretty atrocious, especially Angie, who spent most of the episode complaining about being bored at an outer freakin’ space amusement park that she travelled to in a spaceship that is bigger on the inside!!! It’s not like she’d been traveling the cosmos for a while and the excitement wore off… this was her first trip.

But spoiled brats aside, there are some truly awesome moments once the kids get sidelined. The Doctor becomes partially upgraded and has a chess duel in his head with his cyber-self that was incredibly fun to see unfold. Matt Smith was having a blast with the dual role and the enthusiasm pours over into the viewers. The climax of the episode is also quite cool, involving a last stand in a castle (amusement park style) with an army of Cybermen rising from the water to attempt to take the castle.

Series 7 is drawing to a close and the penultimate episode, Nightmare in Silver, is a strong way to lead into the finale. Neil Gaiman once again proves he can masterfully navigate the world of Doctor Who and create substantial, long-lasting additions to the mythology. While there wasn’t much setup for it, I’m sure all fans are waiting on the edge of their seats to find out the answer when it all comes to a close next week with The Name of The Doctor.

Clara. What happened?! She started so strong. THE KIDS! The twist that was obvious from very early on.

Enjoyable on so many levels and overcomes some minor issues to really embody the wonder and fun that this show can bring.