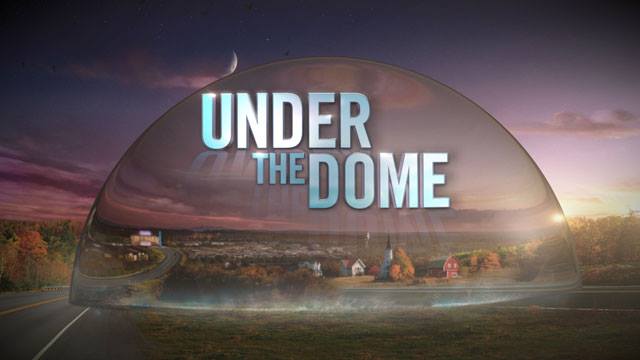 Stephen King has had his work adapted for television for a staggering total of four decades, dating all the way back to 1979’s Salem’s Lot. The rate of quality is certainly up for debate, with some being pretty darn good (IT) while others being embarrassingly bad (The Shining 1997). CBS has decided to spice up the summer 2013 TV season with the gamble of debuting their major adaptation of King’s massive opus Under the Dome, hoping it can find its genre audience in the less crowded summer market.

[pullquote_left]Just enough intrigue to be have me return next week.[/pullquote_left]Normally my eyes would roll a bit at the idea of another attempt at cashing in on King’s work, especially during the summer TV season, but the hiring of Brian K. Vaughn as showrunner piqued my interest – Vaughn is responsible for some of the best episodes of Lost and creator of the excellent comic series Y: The Last Man. The Pilot episode is a mixed bag of brilliantly devious effects, some hammy acting and just enough intrigue to be have me return next week to see where it goes.

The show has a neat 80’s Spielberg aesthetic and my thoughts weren’t that far off-base when I discovered that it was produced by Amblin Television. The plot is simple enough: the small town of Chester’s Mill is suddenly and unexpectedly cut off from the world by an invisible electrified dome. Most of the Pilot episode deals with the immediate destruction and aftermath of the dome violently planting itself unnanounced. There are some really excellent shots of things being destroyed or smashing into the dome that are totally worth giving the first episode a shot.

[pullquote_right]There are some really excellent shots of things being destroyed or smashing into the dome that are totally worth giving the first episode a shot.[/pullquote_right]But effects don’t make a show and Under the Dome has a survival vibe to it, similar to Vaughn’s work on Lost and maybe a touch of The Walking Dead, that will no doubt be the theme of the show going forward. Dean Norris (Breaking Bad) plays Big Jim Rennie and Jeff Fahey is police chief Howard “Duke” Perkins (Lost) and both serve as the veteran core of the first episode and certainly class up the show, which is littered with unknowns and fairly mediocre actors. Mike Vogel (The Texas Chainsaw Massacre) forgettably plays the real lead of the show, Dale “Barbie” Barbara, but with some interesting deviations from the source material. Rachelle Leferve (Twilight) plays the intrepid journalist Julia Shumway that openly admits she’s not very good at her job, but has some unfortunate connections to Barbie.

The destruction caused by the dome! Dean Norris. Jeff Fahey. The Amblin vibe of the show. The deviations from the book that set Barb and Big Jim at very different starting points. The cow.

The goofy kidnapping B-plot. The typically large Stephen King cast of characters is a bit too much to introduce in one episode. The varying degrees of acting talent.

Filled with style, potential and awesome dome-induced destruction effects, the latest Stephen King adaptation certainly warrants audiences coming back for a second episode but once too often feels a bit too silly to be a great first outing.