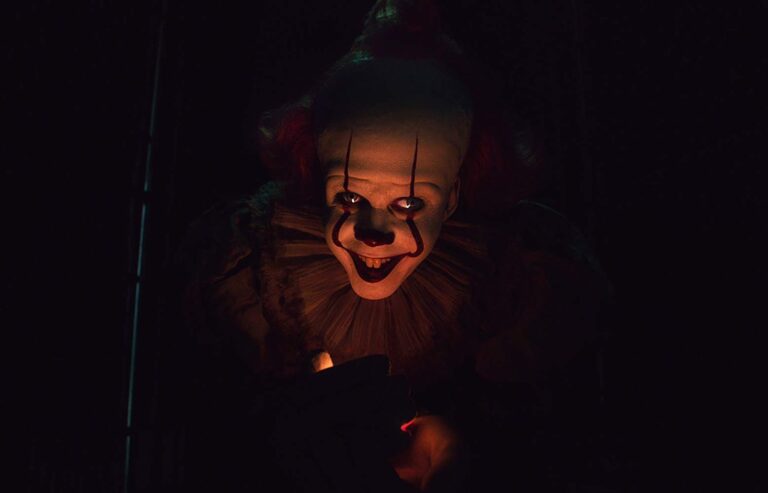 Two years after director Andy Muschietti’s acclaimed adaptation of Stephen King’s IT, which narrowed the massive scope of the novel to focus solely on the first half of the sprawling horror saga, Pennywise the Dancing Clown (Bill Skarsgård) returns to prey on the children of Derry, Maine. IT: Chapter Two picks up 27 years after the events of the previous film, and finds the members of the Loser’s Club scattered across the country, barely able to recall the events of their childhood.

Still a hypochondriac, Eddie (James Ransone) is now a risk analyst, while Ben (Jay Ryan) has transformed from shy, round-faced “new kid” to hunky, accomplished architect. Bill (James McAvoy) is a successful novelist and Hollywood screenwriter, despite the fact that nearly everyone thinks his endings are terrible, and Richie (Bill Hader) has parlayed his foul mouth and quick wit into a standup comedy career. Beverly (Jessica Chastain) runs a fashion line that she co-owns with her husband, who turns out to be cut from the same cloth as her abusive, lecherous father, and Stan… is basically still the same.

As for Mike (Isaiah Mustafa), he never left Derry — in fact, he’s spent the past 27 years researching the source of the ancient evil that has plagued the town for centuries. It’s Mike that contacts his old friends and asks them to come home, where slowly the memories of their last summer together begin to resurface: rescuing Ben from the local bully, swimming in the rock quarry, and frequent encounters with the horrific, shape-shifting Pennywise. Not only has the slavering clown begun feasting on local children again, but he’s got a score to settle with the Losers and is practically begging for a rematch.

While Muschietti’s first film was laser-focused on the younger versions of its characters, IT: Chapter Two frequently jumps between timelines, with the cast of the previous film reprising their roles (and in some cases, being digitally de-aged) for the numerous flashback sequences. As the adults search for reminders of their past and artifacts that will help them defeat Pennywise — fans of another Warner Bros. franchise will no doubt pick up on the resemblance to Horcruxes — Muschietti juxtaposes their journey with childhood events that took place in the same locations. Expect plenty of scares as both the adolescent Losers and their adult counterparts are terrorized by Pennywise, who takes a variety of grotesque new forms.

Once again, the cast is uniformly spectacular, with Skarsgård leaning further into the physicality of his performance — a sequence where he taunts Beverly while applying his signature greasepaint is especially effective. The adults are pitch-perfect counterparts to the adolescent Losers, but none more so than Hader as the grown-up Richie, still hiding his fear behind a veneer of wisecracks and vulgar epithets. But it’s not just fear of an evil clown that Richie is trying to tamp down — there may be a secret that no one knows, not even the rest of the Losers, and Hader is truly superb as he anguishes over the thought of the truth getting out. Ransone is also brilliant, and bears such a close resemblance to the younger version of Eddie that you wonder if Muschietti plucked him out of a future timeline just to appear in this film.

Much has been made of IT: Chapter Two‘s extended running time, clocking in just a few minutes shy of the three-hour mark, but I never felt like it overstayed its welcome. On the contrary, the film often feels as though it’s rushing through certain parts of the story, and while the flashbacks allow for more time spent with the younger characters, all of whom remain just as endearing this time around, the adults feel a bit short-changed and could have used some additional screen time. Likewise, although Muschietti did a masterful job of building tension between the scares and sustaining dread with the previous film, there’s a veritable parade of freakish imagery and terrifying moments here — so much that many of them barely have enough time to register before we’re moving on to the next.

Add this to a somewhat lackluster ending that wraps up a bit too cleanly, and the result is a film that, while still an absolute must-see, is ultimately less engaging and less scary than its predecessor. IT: Chapter Two may provide more than enough nightmare fuel to haunt your dreams for a few days, but don’t expect it to have the lasting impact of the previous film.