TV Review: ‘Living with Yourself’ 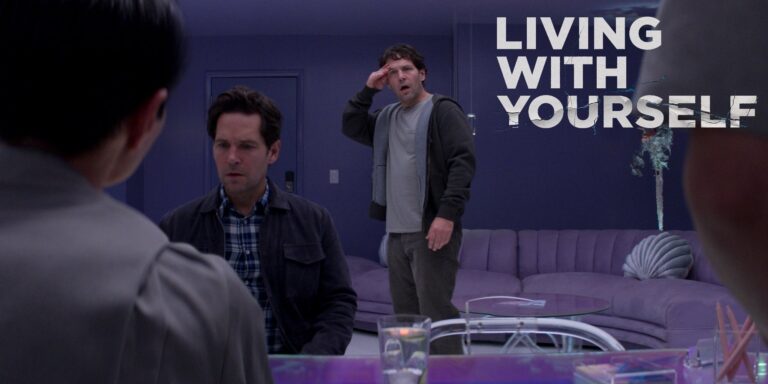 What’s better than a Black Mirror style Netflix series starring Paul Rudd? The same concept, but starring two Paul Rudds! That’s what the streaming giant is bringing to the table in Living with Yourself, a quirky dark comedy showcase for the talent and likability of its lead actor.

Miles (Rudd) is smack dab in the center of a midlife crisis. A tip from a co-worker sends him to a secretive spa promising a rejuvenated life, but instead he wakes up buried alive only to discover a better version of himself is living his life. Spoiler alert (but not really): it’s his clone. What transpires from here is a physical and existential struggle for both versions of Miles to take control of their career, their relationship with wife Kate (Aisling Bea) and their place in this world.

Living with Yourself is a lean, fast-paced series that makes interesting storytelling choices to tackle a sci-fi trope that isn’t exactly new ground. Rudd’s nuanced, brilliant performance as Miles and his clone is some of the actor’s best work to date. The mix of top notch special effects and subtle little mannerism changes by Rudd instantly sell the audience that these are two completely different people, despite not going far outside Rudd’s normal personality wheelhouse.

The eight episode series unfolds from multiple vantage points as the audience is taken through the story from the perspectives of both Miles and his clone, and later Kate. The characters are wonderfully realized and by the final episode all three are layered and relatable, creating something more akin to a dysfunctional family drama than an evil clone conflict.

Living with Yourself indeed makes thoughtful choices with its characters, but it doesn’t always make for entertaining viewing. The three main characters are not well rounded people that are easy to root for and make many frustrating, selfish choices throughout the eight episode run. The series is quite a bit darker than what many might expect from Rudd and while the comedy is there and quite funny when it takes center stage, it definitely plays backseat to the internal struggles of the main three characters.

Irish actress Aisling Bea has the tough task of holding her own against the duo of Rudds and excels in some of the more unintentionally comedic scenes. The character of Kate isn’t always written the best or affable, but Bea’s charm is enough to elevate a potentially unlikable character in the early episodes before she is given a bigger spotlight and backstory near the end of the season.

The series also has a fair amount of surprises (wait for that cameo) and story twists due to the multiple vantage points, making for an enticing binge watch with its running time at roughly a half hour each. As mentioned earlier, many will compare it to an extended Black Mirror episode and that’s not exactly incorrect, but this format is somehow way more satisfying in its bite-sized bits, filled with time to let the story and characters grow. Living with Yourself may not connect with everyone, but the series is well worth diving into if only for Paul Rudd’s superb dual performance.

Living with Yourself premieres globally October 18, only on Netflix.