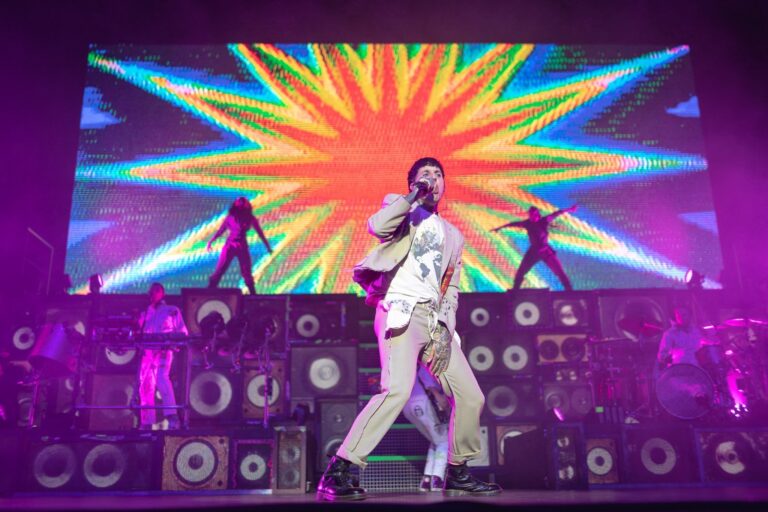 Opening with “Mantra,” the lead single from 2019 release Amo, Bring Me the Horizon tore through a trio of high-energy tracks, with Sykes playfully admonishing the audience to be more lively. “I need you to wake the fuck up,” he demanded in his thick Yorkshire accent. “I’m jet-lagged, what’s your fookin’ excuse?” The crowd responded with deafening sing-alongs for “Shadow Moses” and “Happy Song,” which found Sykes frequently trying to suppress a delighted grin.

The 90-minute set was a fairly even mix of offerings from Amo, 2015’s That’s the Spirit and breakthrough album Sempiternal, and although some have decried the band’s gradual shift away from the blistering hardcore sound of their earlier material, there’s no denying that Bring Me the Horizon still knows how to deliver one hell of a rock show.

Sleeping with Sirens also returned to Phoenix, just three months after playing at the Rockstar Disrupt Festival in July. Lead singer Kellen Quinn, who recently traded his blonde locks for a shorter, darker hairstyle, led the band through new selections from their latest studio release, How it Feels to Be Lost, while peppering in a few crowd-pleasers like “Kick Me” and “Settle the Score.”

Quinn also spoke candidly to the audience about his history of anxiety and depression, urging those with similar struggles to keep fighting and resist the urge to give up, a sentiment met with enthusiastic applause from the audience.

The evening opened with a performance from YouTube sensation Poppy, flanked by a trio of bandmates in identical blonde wigs and expressionless latex masks. As Sykes later quipped, while thanking the artist for joining the tour, “that’s an experience, innit?”

PHOTOS: Sleeping with Sirens, Circa Survive and Sum 41 sweat it out for Rockstar Disrupt Festival