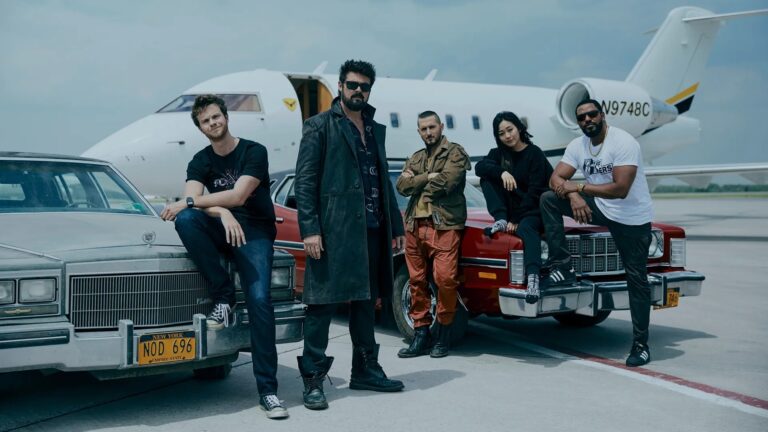 Oi! The most unpredictable show on streaming is back again and gives zero f*cks. Amazon Prime Video will be releasing the first three episodes of The Boys Season 3 this Friday, with each subsequent week seeing one new episode until the end of the eight-episode run and it’s as sick and addicting as ever. Full disclosure: we got to see the entirety of Season 3 and our review is based on the overall episodes as a whole and not just the three episode debut, although we will avoid major spoilers for all.

Things have been relatively quiet for The Boys since the Season 2 finale. Butcher (Karl Urban), Frenchie (Tomer Capone) and MM (Laz Alonso) are working for the government under Hughie’s (Jack Quaid) command, while Homelander (Antony Starr) has been playing nice under the control of Vought following his embarrassment at as a result of his lover Stormfront’s (Aya Cash) outing as a Nazi. But Butcher and Homelander are boiling over for a real, fully unleashed fight and a whisper of a weapon that can kill even Homelander has everyone scattering to solve the mysterious death of the first supe, Soldier Boy (Jensen Ackles), from decades ago.

Season 3 brings the tightest storytelling yet in the series in a more cohesive set of episodes with a clear purpose for all involved. For the first time, the season doesn’t feel overstuffed with characters and excessive backstory and instead has a laser focus on those already established. Gone are the extended multiple sub-plots to kill time or have silly side adventures for a laugh (looking at you, The Deep), instead all paths intersect to Homelander, Butcher and Soldier Boy – and those paths are bathed in more blood and gore than ever.

The first three episodes particularly give audiences everything they need to dive back in and be ready to devour every new episode. Antony Starr is still superb as Homelander with Season 3 giving him the opportunity to “be himself”, i.e. speak his mind, which gathers him a shocking increase in public support in a not-so-subtle nod to a recent President. Homelander unchained without Stillwell (Elizabeth Shue) or Stan Edgar (Giancarlo Esposito) to rein him in is a nightmare. Karl Urban is also just killer, metaphorically and literally as Butcher, and his rivalry with Homelander is at peak tension, especially where it involves young Ryan (Cameron Crovetti), making for one fantastic showdown that plays out all the way to the finale.

Starlight (Erin Moriarity) and Queen Maeve (Dominique McElligott) are the only real “good guy” heroes of Season 3 with McElligott getting some of her best material to date on The Boys. Moriarity also continues to grow into the only sane, but still badass supe as she evolves from the naïve star-struck girl from Season 1. Even the aforementioned The Deep (Chace Crawford) gets to return to the main plot, with Crawford still being the king-of-cringe, portraying the aqua-hero with dopey, clueless crass. Sadly, Supernatural fans salivating at the chance of seeing Jensen Ackles make his very R-rated debut will have to wait just a little bit longer than the first three episodes to meet Soldier Boy in his true fashion, but the patience pays off: Ackles is awesome.

The Boys wouldn’t be The Boys without its trademark violence and gross out humor and the first episode really sets the stage with every trademark of the show. I dare you to look away from the hilariously disgusting battle with the shrinking power of Termite in the opener and the guts soaked flashback of the third episode revealing Black Noir’s mysterious origins – and this is only in the first three episodes. Or wait until you experience “Herogasm” in one of the later ones…hoo boy.

Overall, The Boys Season 3 doesn’t have a clunker episode in the bunch and the three episode premiere is more than enough to appease fans. The entire season is a lean, mean stomach-wrenching machine that pushes the limits at every turn and is wickedly accentuated by scathing social commentary. It all ramps up to a bombastic, satisfying finale that has a terrific setup for what will once again be another highly anticipated season.

The Boys Season 3 will premiere with the first three episodes on Friday, June 3, and new episodes available each Friday following, culminating in the finale on July 8.