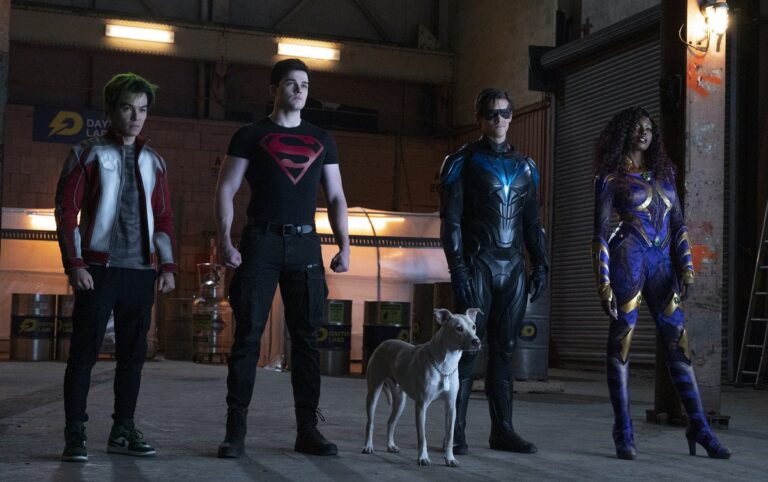 Now that the DC Universe streaming service is officially dead, its flagship show Titans is moving to the big leagues on HBO Max for Season 3. A tragedy rocks our heroes and the team finds themselves headed to the bleak, dangerous streets of Gotham where they reunite with old friends to protect themselves and unravel a dark mystery.

Season 3 comes out of the gates swinging with a terrific action sequence that finally sees the Titans working together as a team and being the heroes fans know and love from the source material. Seeing Dick Grayson aka Nightwing (Brenton Thwaites) cracking jokes and using his batons in clever ways to take down thugs is pure comic book bliss. His leadership is at last on display and Beast Boy (Ryan Potter), Starfire (Anna Diop), Superboy (Joshua Orpin) and Krypto all perfectly play off each other while wiping up the bad guys and it’s beyond fun. Sadly, Raven (Teagan Croft) does not appear and is only mentioned in the early episodes, being off on a mission we won’t spoil here.

Yet the real core of the first three episodes revolves around Jason Todd/Robin’s (Curran Walters) tragic turn into the villainous Red Hood. Titans takes some significant liberties with the origin (and the Batman mythos) although the spirit of the story arc remains intact. But Walter’s Red Hood is no violent vigilante, he’s a sadistic serial killer getting his kicks toying with the team in a cat-and-mouse game with dire consequences. Walter does a great job showing just how far gone Jason Todd has become and makes for a truly hateworthy villain in these early episodes.

Being that the Titans are in Gotham, with the wealth of the Batman Rogues Gallery available, Red Hood couldn’t be the only villain to get the spotlight. Season 3 sees Vincent Kartheiser (Angel, Mad Men) debut as the master of fear himself, Dr. Jonathan Crane aka The Scarecrow, imprisoned in the lower levels of Arkham Asylum. Kartheiser is superb as this dry witted, slithery incarnation of the super-villain as he plays Dr. Lecter to Dick Grayson’s Clarice Starling. This version of Crane might not be the over the top ghoul fans are familiar with, but Kartheiser’s take feels real and always very dangerous.

Savanah Welch also joins the cast as Commissioner Barbara Gordon, previously known as Batgirl. Barbara and Dick have a complex history and Welch and Thwaites have a believable chemistry as they frustrate each other over and over while working on the Red Hood case. Be prepared though, Welch’s version isn’t the bubbly Babs, but a world-weary warrior trying to honor her father’s legacy. Not only is she wheelchair ridden (from the Joker?), but this version also has had a leg amputated. None of which are directly addressed, adding another dark layer to this older, darker version of the DC Universe.

Alan Ritchson also deserves major praise for his return as Hank Hall aka Hawk. Ritchson’s big, lovable jerk routine as Hank continues to be wonderfully endearing and seeing his growth this season makes him even easier to root for. Ritchson continues to make a normally goofy character multi-layered and always livens up a scene when he’s involved. No doubt fans will talk about his arc when audiences finish up those first three episodes.

Titans has also also never looked better with a noticeable bump in budget dollars thanks to the HBO Max backing. The sets in Gotham City are gorgeous and take the audience to brilliantly designed locations like the neo-Gothic GCPD to the upgraded Batcave and down to the dank, dirty bowels of Arkham Asylum. The show doesn’t shy away from on-location shooting either and finds each episode venturing out to new spots that keep things looking gritty, grounded and realistic.

After viewing the first five episodes, Titans‘ storytelling has tightened up, the characters are finally getting along and being heroes, and the new cast additions somehow improve on an already loaded ensemble. The show is revitalized and hitting on all cylinders for HBO Max with the last of the three debut episodes going out with a jaw-dropping ending. If the rest of the season remains at this quality, much like its characters, Titans may have finally matured into the show it always had the potential to be.