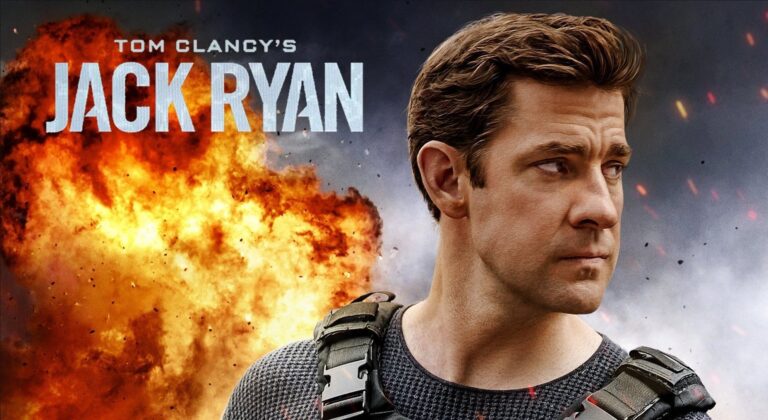 Amazon Studios has been all-in with the marketing and promotion for their highly anticipated new series Tom Clancy’s Jack Ryan for nearly all of 2018 displaying an enormous amount of faith in the show. The international military-thriller stars John Krasinski (A Quiet Place) as the iconic hero from Tom Clancy’s best-selling novel series that has been previously portrayed by an illustrious list of actors including Harrison Ford (Patriot Games), Alec Baldwin (The Hunt for Red October), Ben Affleck (The Sum of all Fear), and most recently Chris Pine (Jack Ryan: Shadow Recruit).

Produced by LOST’s Carlton Cuse and Graham Roland, Tom Clancy’s Jack Ryan can easily be accused (or praised) of attempting to recreate 24 for a new generation after that particular franchise stuttered and fell multiple times to rekindle the brand. After viewing the first six episodes of Jack Ryan, kindly provided to us by Amazon Studios, the show’s choice for a more cerebral hero anchored by the currently on-fire career of John Krasinski helps elevate what just might have been another one of those by-the-numbers homeland defense thriller retread to something better.

While the show is based on Clancy’s work, it’s not based on any one particular novel or story line and the core characters are all given a fresh origin treatment. But not to worry, the essence of Clancy’s characters are all intact and I really appreciate the way Jack Ryan himself is handled in the series. He’s the hero, but in more realistic terms that aren’t necessarily the clichéd slow-mo running away from explosions (like in the banner image for this review) or other stock type action heroes – as Ryan was always intended.

Jack Ryan is absolutely not 24‘s Jack Bauer and instead we are given a thoughtful, relatable analyst that would prefer to stop terrorist threats via his data than hold a gun in any situation – even though sometimes it is unavoidable and he’s capable if need arises. Ryan is introduced as a fresh faced analyst who doesn’t quite see the data like everyone else while working through his early days in the CIA. He’s strong-willed and stubborn, which is an absolute must for him since he’s saddled with a firm sense of morality that clashes with all of those around him. Ryan’s moral stances are immediately are called into question as he discovers a lead that unearths the identity of a shadowy terrorist with potential large-scale attacks already in the works.

Ryan’s work career starts to gather attention from old and new acquaintances, but none more important than his new boss James Greer (Wendell Pierce). The Clancy fan-favorite character helps establish the best relationship in the series and while Krasinski carries most the show on his shoulders, his scenes are almost never better than those with Pierce. The characters initial annoyances with each other slowly begins to blossom into admiration and respect – but still retains that bristle due to each man’s different approaches to the job.

The show looks expensive and the production values provide an appropriately large scope for the international settings that keep shifting in Ryan’s pursuit of the terrorist Suleiman (Ali Suliman). The show plays up those epic sequences with sweeping speed that gives Ryan a sense of disorientation as he tries to establish normalcy in his personal life causing him to pursue a romantic interest with infectious diseases doctor Cathy Muller (Abbie Cornish). Cornish isn’t given much to do with the role in the early episodes, but it’s important to see Ryan’s vulnerability in all walks of life and those scenes help flesh out Ryan and give Krasinski a chance to turn on the charm – and her expertise is obviously going to come back around.

Amazon Studio’s definitely has a solid show on its hands with Tom Clancy’s Jack Ryan and it continually improves for the entire stretch of the first six episodes. While overall the series doesn’t feel like anything all that fresh or new, Jack Ryan has a take and something to say on this particular genre and this is a great showcase for Krasinski as he continues to rise up the list of Hollywood’s top male lead actors.

This occasionally by the numbers military and international thriller series succeeds on the sheer charisma and likability of star John Krasinski alongside his solid chemistry with co-star Wendell Pierce.