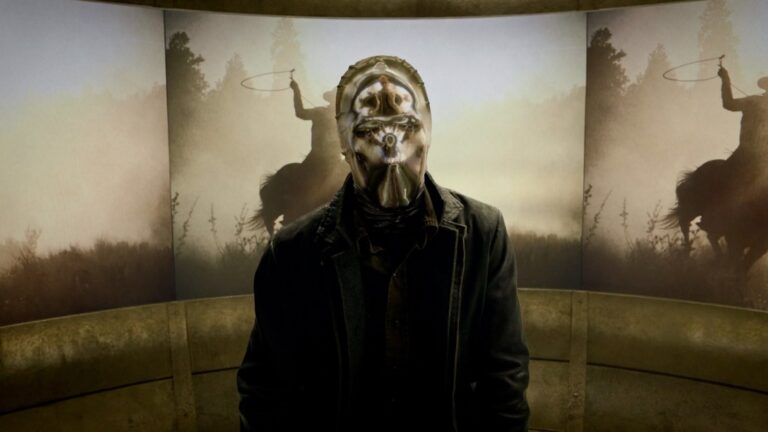 HBO subscribers will be the ones watching the Watchmen when the risky and ambitious new continuation of the genre-defining graphic novel debuts on the premium channel. The series from Damon Lindelof (LOST, The Leftovers) gets off to a sleek, fascinating start that sets itself apart from the source material, while somehow still managing to feel steeped in its mythology.

Set in the alternate history of the graphic novel, the series picks up decades after the comic’s catastrophic finale. Regina King stars as new character Angela Abar, a mother and member of the mask-wearing Tulsa Police Force, investigating the murder of one of her fellow officers alongside her friend and Chief, Judd Crawford (Don Johnson). This puts the officers on a collision course with a homegrown terrorist organization, using the iconic Rorschach mask as their symbol, as they begin a bold offensive against the establishment.

That synopsis might sound like a by-the-numbers description of a police drama, but the opening episode of Watchmen, titled It’s Summer and We’re Running Out of Ice, is anything but conventional. The whole package top-to-bottom is slick, intriguing and incredibly stylish. The color schemes, costume designs and cinematography all sizzle, but the most impressive accomplishments of the opening episode are the choices made to tell its own story, yet just so happens to take place in the Watchmen world — and it all works!

The episode is full of clever ideas such as the police force dressing and acting like registered superheros in order to protect their families — detectives even get their own unique outfits and monikers. Even a sequence putting a weird conspiracy twist on a reoccurring meteorological event related to the infamous alien squid from the climax of the graphic novel is simple but genius. Watchmen is full of love for the original in both the tiny Easter eggs and the large plot points that fans with any reverence for the comic will have a blast digging into within every frame.

This does beg the question of whether casual fans will get the same enjoyment, but I think the action and world building the episode does far outweighs missing out on self referential material — especially since original HBO series normally ask for more patience from their viewing audiences. A white knuckle shootout on a farm late in the episode should have enough badass carnage to satisfy anyone not invested in the mystery or the episode’s comic book connections.

Aside from cool outfits and stunning set pieces, a series is nothing without a great cast, and this one is exceptional. Regina King is absolutely fantastic as Angela, a character who is both a kickass hero and a warm, sarcastic mother and friend. Her chemistry with episode MVP Don Johnson is incredible and the duo are a joy to watch every time they share the screen. Tim Blake Nelson is also a character I can’t wait to see more of as Detective Looking Glass, in his freaky liquid metal mask, and the excellent character actor is a huge standout in his few scenes.

One of the best and smallest parts of the episode is quite possibly the most interesting cast member, Jeremy Irons, as a character who almost certainly is playing the “villain” from the source material: Adrian Veidt aka Ozymandias. He only has one wonderfully creepy scene near the end of the episode (featuring Ozymandias’ purple and yellow color schemes), but every second is uncomfortable and riveting. Fans curious about that other “villain” from the original story, Dr. Manhattan, will only get a small glimpse of the naked, glowing blue god in the premiere, but even that look is a fun nod and enough to give proper goosebumps making the wait for episode two that much harder.

HBO took a big gamble continuing a much-beloved and protected property such as this with such a vastly different vision than anyone could have predicted — and miraculously, it pays off. Watchmen is a poignant mental and visual feast that asks heavy questions in a fascinating alternate Earth history, brought to glorious life by tremendous cast performances and should captivate old fans and ensnare all new ones.