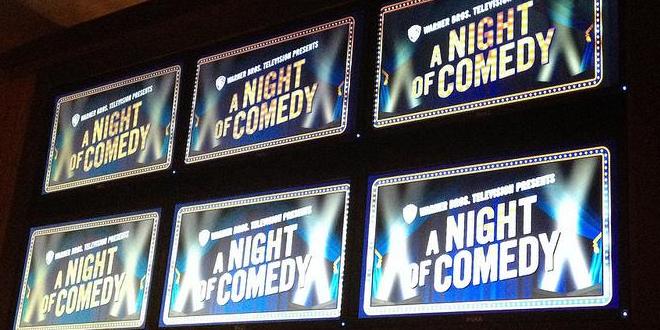 Last week on a Warner Bros. Television sponsored trip, I was given the opportunity take part in their “Night of Comedy” to close out the most recent TCA press tour. The event took place in the beautiful iPic Theater in Pasadena and featured some new faces and old favorites from their comedy arsenal of shows.

Executive producer Bill Lawrence (Scrubs, Cougar Town) and creator/executive producer Adam Sztykiel were on hand in the theater to introduce an early cut of the second episode of their upcoming show Undateable, which has yet to solidify a premiere date on NBC. Hailed as a “modern take on The Odd Couple” by Lawrence, the show stars four real life up and coming stand-up comics, whom also happened to be friends prior to being cast in the show.

Undateable is a multi-camera show, so it has a throwback vibe to older TV comedies akin to Friends or even Cheers, which Lawrence referenced a few times. The cast is definitely talented and has undeniable chemistry. Much of the show is ad-libbed, giving an organic vibe to the rapport between the four friends. The episode itself definitely had some growing pains and struggled a bit establishing tone and comedic flow for some of its jokes, but the cast was visibly having fun.

But contrary to the premise of “the cool guy gets his less cool friends laid” of Undateable, Bill Lawrence said in the post screening Q&A “I showed you this episode, because we ditch it (the premise) in the second episode and it becomes about a group of friends.” Which bodes well for the show because that is where the episode worked best and found its voice.

Chris D’Elia and Brent Morin work great together as the “Odd Couple” of Danny and Justin and their supporting friends, actor/comedians Rick Glassman and Ron Funches, provide the more quirky laughs as Burski and Shelly. Morin brings a Topher Grace-like charm to his regular guy character while D’Elia takes his character’s edgier persona to some funny places, but is occasionally written a bit too much like a Fonzie “cool guy” character, complete with leather jacket and motorcycle. D’Elia will certainly benefit from the show dropping its premise and just allowing him to be himself.

Next I was shuffled off to another theater where I got to screen the early season seven The Big Bang Theory episode The Scavenger Vortex hosted by the episode’s main focus, Raj himself, Kunal Nayyar. Throughout the episode he stopped the show to give some insight and entertaining stories about its filming, while the critic audience got to enjoy show themed Chinese food and drinks.

During a post screening Q&A he gave us some tidbits about the episode premiering this week, Thurday Jan 30th, called The Convention Conundrum that features Star Wars legends James Earl Jones and Carrie Fisher. Kunal said the following about working with James Earl Jones: “He was phenomenal to have on set. He’s a true gentleman and a great talent.”

On the subject of Comic-Con, I asked Kunal what his experience has been like in San Diego and he said “Yeah man, Comic-Con was crazy. The first year we went to Comic-Con we were like: Oh my god, it’s a five thousand seat theater. I don’t know if we’re going to be able to fill this theater. Seriously Chuck Lorre (creator/executive producer) was regretting being there. He was like ‘What if no one comes to watch?’ But literally there was a line a day in advance. It was so packed it felt like being in a rock band. Like The Beatles. You walk out to the screaming! People banging on the bus. That was a first for me.”

To close the night, the cast of Undateable once again took the focus and did what they do best: a rousing set of stand-up comedy. Any lingering doubts to the talent of the group of actor/comedians was laid to rest as they all had killer, very different, 10-minutes sets that they performed for the audience. Rick Glassman had a particularly clever and well executed set displaying an extremely sharp wit. Chris D’Elia was the headliner and for good reason, the guy is a natural, phenomenal stand-up comic. His legion of social media fans and followers are certainly not misguided.

All in all, WBTV put on a very classy and posh night of fun and laughs for the critics. I was very happy to be a part of it and they knocked the event out of the park. I look forward to seeing more from The Big Bang Theory (especially the Star Wars episode) as well as seeing Undateable get its shot to find an audience and grow.