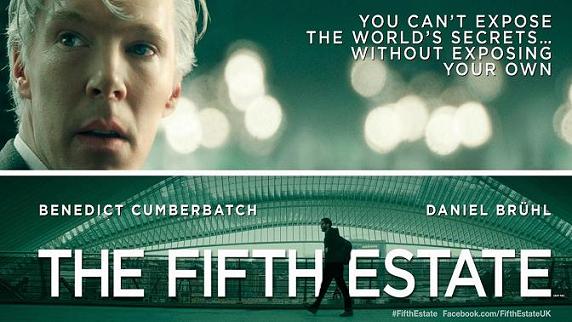 Julian Assange is one of the most fascinating figures in recent years, due to a little thing that has become a household name called WikiLeaks. The inevitable film adaptation wasn’t far behind, and it nabbed two of the better young actors working today in Benedict Cumberbatch and Daniel Brühl to tell the tale of internet free-information emancipation, but their talent was not enough to turn The Fifth Estate into anything other than a disappointing, made-for-television level biopic.

Director Bill Condon has directed films that have been nominated for Oscars (Dreamgirls) aaand also the last two Twilight film, so you never know quite what you’re going to get with him. He works from a pretty bad script here, with dialogue clunkier than the oldest of laptops, but he doesn’t do much to pull better performances from his actors or deal with the film’s major pacing issues.

Cumberbatch and Brühl have their moments but can’t rise above the mediocrity of the film, especially Cumberbatch, whose incredible talents seem miscast as Assange. There’s a even a few montage shots that seemed to almost be an homage (rip-off?) of “detecting” scenes from his role on Sherlock. As a matter of fact, much of the film seems more like a mediocre BBC mini-series than a major motion picture.

The Blu-Ray release looks pretty sharp on the screen and certainly isn’t a downfall of the film. There are some Matrix-y scenes in the WikiLeaks mind palace (whoops, that Sherlock reference was my fault) that look really neat on the disc but also some that don’t look so great due to uneven work by the special effects team.

Disappointingly little effort was put into the special features, especially when there was a ton of real life material that could have complemented the film’s subject matter extremely well. There’s a feature on the previously referenced WikiLeaks mind palace called The Submission Platform: Visual Effects that is somewhat interesting as it dives into bringing those scenes to life. In addition, there’s a shorter feature, In-Camera: Graphics, that deals with the practical effects in the film and finally the disc is rounded out with Scoring Secrets with composer Carter Burwell that most viewers will probably skip all together.

The Fifth Estate looks nice on the TV in the Blu-Ray format but unfortunately the film was a wasted opportunity. The talented cast falls flat in a story that is interesting but isn’t done justice. Topping things off, the ending is a cop out and the special features are not worth much significant time in your own personal mind palace.