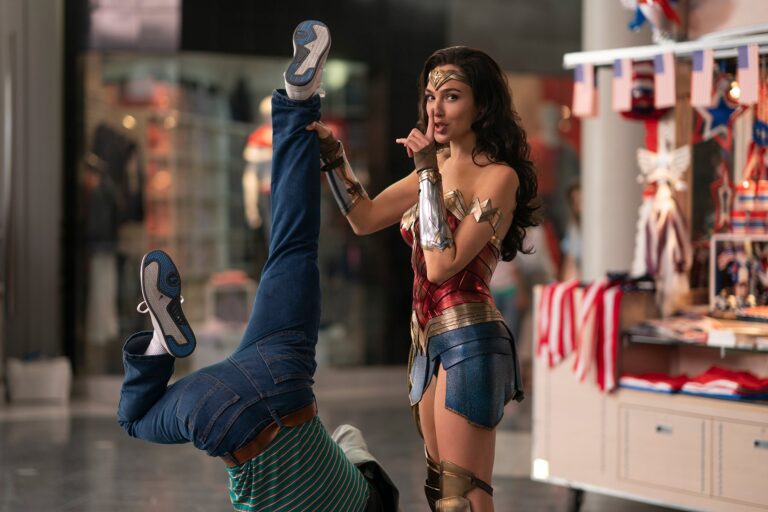 After showing up for a supporting role in 2016’s Batman v Superman: Dawn of Justice, Gal Gadot teamed up with director Patty Jenkins for an exciting and well-crafted origin story the following year with Wonder Woman — a film which I loved, and still consider to be the pinnacle of the DCEU. The film’s worldwide box office gross of $822 million assured a follow-up would arrive in the not-too-distant future, and anticipation for Wonder Woman 1984 has only grown since the onset of the COVID-19 pandemic, which bumped the sequel from its originally scheduled summer release date.

Just as Wonder Woman proved the viability of female superheroes, upending the “boys club” mentality that had long been synonymous with the genre, so too is Wonder Woman 1984 poised to usher in a new status quo: it’s the first in a slate of upcoming Warner Bros. films to release simultaneously in theaters (where they’re open) and on the HBO Max streaming service. The studio recently announced its plan to distribute 17 films in this manner over the course of the next year — a controversial decision that has put Warner Bros. at odds with filmmakers like Christopher Nolan and Denis Villeneuve — but as the first offering out of the gate, Wonder Woman 1984 could very well set the stage for a major industry shake-up.

As the title suggests, the film takes place some six decades after Diana’s previous solo adventure, in the era of Walkmans, Pontiac Firebirds, leotards and leg-warmers. Our heroine works in the archaeology department at the Smithsonian, but still finds time to suit up in full Wonder Woman regalia to thwart a robbery at a shopping mall jewelry store, which just so happens to be trafficking in stolen artifacts. One of those pieces, the Dreamstone, is of particular interest to Maxwell Lord (Pedro Pascal), a smooth-talking con artist whose oil investment empire teeters on the brink of collapse. Max’s path to the stone runs through Diana’s colleague and newfound friend Barbara Minerva (Kristen Wiig), a socially awkward gemologist who regards Diana as everything she wants to be: confident, sexy and special.

Unaccustomed to men displaying anything other than disdain toward her, Barbara is immediately enamored with Max’s flirtatious approach, and she thinks nothing of handing over the Dreamstone. But Diana senses trouble, especially when she and Barbara begin to piece together the stone’s origins and the mystical properties imbued within. Meanwhile, Diana is also reeling from the sudden resurrection of Steve Trevor (Chris Pine), who perished in the first film and whose memory Diana has clung to for the past 60 years.

Steve’s return, the circumstances of which we won’t bother trying to explain, makes for a fun bit of role reversal. In Wonder Woman, it was Diana trying to make sense of the strange new world in which she found herself, but the sequel finds Steve marveling at half a century’s worth of cultural changes. Pine navigates this material expertly, eyes wide and mouth agape as he discovers Pop-Tarts and Easy Cheese, and puzzles over fanny packs and parachute pants. The rekindling of Steve and Diana’s romance also provides the film’s most tender moments, particularly during a stroll along the National Mall or a plane ride through a 4th of July fireworks display, and the lovers both get a chance to get their hands dirty when their quest to locate Max takes them to the Egyptian desert, culminating in a thrilling chase sequence marred by some especially dodgy green screen.

In fact, much of the film’s action suffers from substandard visual effects: watching Diana zip around using the Lasso of Truth as a traversal device should be awesome, but too often she exhibits a floaty, almost weightless quality that looks more like a videogame character than a convincing Amazon warrior. By contrast, there are multiple close-up shots of Diana swinging in to scoop innocent bystanders out of harm’s way: the tight framing makes it clear that we’re actually watching Gadot, rather than a digitally rendered counterpart, but inconsistent lighting and color-grading make the artificial background against which she’s superimposed all the more noticeable.

Then there’s the climactic battle, a super-powered brawl against a background of concrete and metal that demonstrates many of the same qualities as the final showdown in 2018’s Venom: namely, the dim lighting and gloomy CGI make following the action a chore, and nothing seems to pack any punch (aside from Diana’s shimmering golden armor, which looks rad). The previous film also devolved into a murky digital mess in the third act, and it’s a shame that Wonder Woman 1984 repeats this mistake instead of opting for a new direction.

Gadot is still excellent in the title role, continuing to showcase the qualities that have long defined Diana in the comics: poise, strength, grace, toughness, and a willingness to make great sacrifices in order to defend others. There’s something about Gadot’s portrayal that makes her feel so much more synonymous with the character than any of her DCEU costars and their respective counterparts. Pine is effortlessly charming, as one might expect, and Pascal is exuberantly unhinged as a Trumpian megalomaniac obsessed with greatness. As for Wiig, she feels a bit miscast here, handling the awkward and nerdy parts of Barbara’s personality with relative ease, but not quite selling her shift from insecure museum employee to apex predator.

Wonder Woman 1984 has much to enjoy, including a more self-assured heroine, a delightfully over the top villain and some great chemistry between its romantic leads. But shortcomings are in equal supply, not the least of which is a bloated running time and a curious ambiguity around the central narrative device that propels the film forward. Regrettably, this sequel fails to achieve the heights of its predecessor, but after months of pandemic life, it will likely scratch the blockbuster itch for anyone that needs a big, loud, colorful adventure.