Movie Review: ‘Once Upon a Time… in Hollywood’ 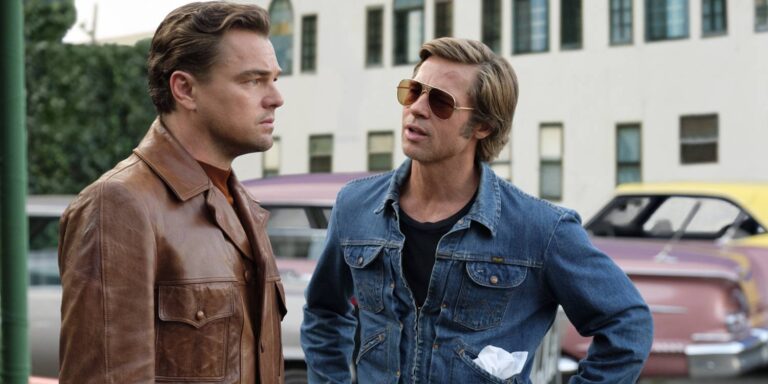 As Quentin Tarantino lurches ever closer to his self-imposed maximum of ten films — an arbitrary limit meant to ensure the revered writer and director hangs up his spurs before his career begins to decline — it’s harder than ever to imagine a version of Tarantino that doesn’t operate at the peak of his abilities. Impressively restrained at times while being wildly, unapologetically indulgent at others, Once Upon a Time in Hollywood is Tarantino at his most personal and self-reflective, a breezy love letter to a Los Angeles that ceased to exist decades ago.

Once the star of a well-known TV western called Bounty Law, Rick Dalton (Leonardo DiCaprio) never made the leap into cinema the way he’d hoped. These days, he desperately tries to stay in the limelight, doing guest appearances on TV shows like FBI while an enterprising producer (Al Pacino) urges him toward cheaply made spaghetti westerns. Meanwhile, Rick’s loyal stuntman Cliff Booth (Brad Pitt) has transitioned from doubling Rick on set to serving as an all-around gofer: he drives Rick to and from jobs, runs the occasional errand, and even fixes his TV antenna after a storm knocks it over. With his affable demeanor and seemingly endless patience, it’s easy to see how a guy like Cliff could strike up a friendship with a star of Rick’s caliber: he’s exactly the sort of dependable, good-natured buddy that anybody would want.

Early on, we’re also introduced to Rick’s next-door neighbors, director Roman Polanski (Rafal Zawierucha) and his wife, actress Sharon Tate (Margot Robbie). Given that Once Upon a Time in Hollywood takes place in 1969, the arrival of Tate brings with it an immediate tension for anyone familiar with the events that would befall her later that summer. It’s almost as if Robbie’s first scene sets an invisible countdown clock in motion — we know where her story is heading, and we know what the film must eventually be driving toward, but we also know that Tarantino delights in subverting expectations and eschewing conventional storytelling. Once Upon a Time in Hollywood is no different.

While Tate remains a figure throughout the film, she exists as more of a tangential figure for most of it. The same can be said for the female members of the Manson family, digging for food in dumpsters and hitching up and down the busy Hollywood streets. Of particular note is Pussycat (Margaret Qualley), whose piercing gaze and overt sexuality pique Cliff’s curiosity enough to lure him to the crumbling Spahn Ranch, a former production town that now serves as the Manson family’s commune. The nail-biting events that unfold here not only feature a host of guest appearances by the likes of Harley Quinn Smith, Dakota Fanning and Lena Dunham, but also serve as one of the film’s best scenes, as Tarantino masterfully milks suspense from every agonizing minute.

We know that Tate’s story and that of Manson’s followers are inexplicably linked, but Once Upon a Time in Hollywood is in no rush to get there. Instead, Tarantino adopts a leisurely “day in the life” pace, frequently pausing on the most innocuous moments and turning them into something captivating. Rick’s encounter with a precocious eight-year-old method actor leads to a moment of self-reflection that feels like a window into the director’s own psyche, and a lengthy sequence where Rick films a pair of villainous monologues opposite up-and-comers Jim Stacy (Timothy Olyphant) and Wayne Maunder (Luke Perry, in his final role) allows DiCaprio to dig into material with remarkable vigor. It’s not that audiences aren’t fully aware of DiCaprio’s talent, but to see it writ large in such fashion is practically awe-inspiring.

They say the devil is in the details, and Once Upon a Time in Hollywood has details to spare. Vintage radio broadcasts and news bulletins are a frequent fixture, and the period-accurate buildings, vehicles and wardrobes — all beautifully photographed by cinematographer Robbie Richardson — transport us back in time to a bygone era and a culture right on the verge of a major shift. Tarantino’s reverence for the time period is on display in practically every frame, including a brief montage of neon signs bursting to life as darkness settles in. In another lovingly bittersweet sequence, Tate hesitantly wanders into a theater showing one of her own films, The Wrecking Crew, and takes a seat in the audience. Tarantino juxtaposes between actual footage from the film and Sharon’s facial expressions as she marvels at the crowd’s reaction, soaking up their laughter while they remain oblivious to her presence.

Once Upon a Time in Hollywood‘s unhurried pace and frequent dalliances with material that doesn’t really advance the plot might present a puzzling proposition for some moviegoers, but fans of the director’s past work are practically guaranteed to revel in those same qualities — it’s those sort of idiosyncrasies that have made Tarantino a true master of his craft. Despite being inspired by and connected to a particular event, Once Upon a Time in Hollywood is less about telling a specific story of the era, and more about capturing its emotion and spirit. In that regard, Tarantino has knocked it completely out of the park.