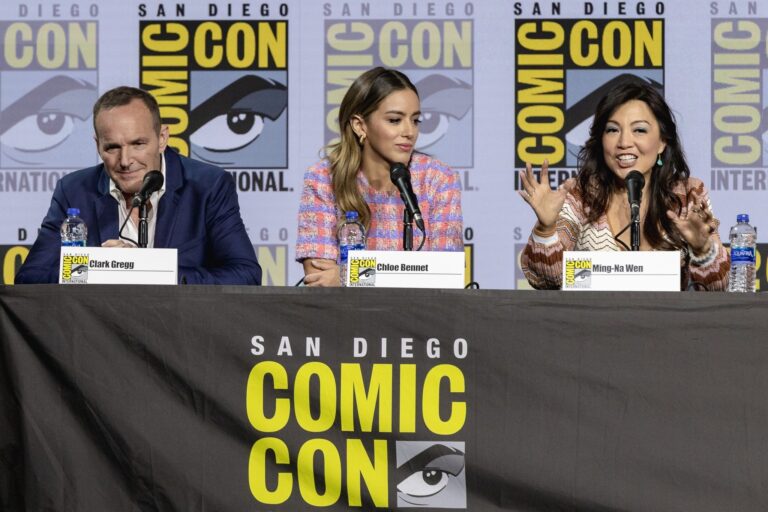 With the end of Marvel’s Agents of S.H.I.E.L.D. on the horizon — next year’s seventh season was recently confirmed as the last — the cast and creative team appeared at San Diego Comic-Con for a series retrospective and a sneak peek of things to come.

In a lively and often hilarious discussion moderated by Jeph Loeb, the cast reminisced about their experiences working on the show for the past few years. “Season 1 is a magical place,” said Clark Gregg. “This has been such an incredible journey because, when I stepped on this stage with the cast of The Avengers in 2010, not long after that, I was dead. And this really nice guy I had met in the green room named Whedon said, ‘we think you may not be so dead.'”

Ming-Na Wen blinked back tears as she recalled the hard work of the crew and the grueling shooting schedules. “It’s just so remarkable that we made every episode in eight days ,” she said. “I don’t think we would have really forced ourselves in every department to do something so miraculous if it wasn’t [just to] entertain you guys.”

Iain De Caestecker admitted that playing a villain was fun at first, but it eventually began to wear on him. “It wasn’t a nice feeling to be acting like that all day, and then I suppose… I’ve always been so paired up with Elizabeth that it was bizarre.”

Executive producer Maurissa Tancharoen also spoke fondly of the cast, and the upcoming end of the series. “We had our last table read on Monday and in the script they put our first call sheet from the pilot,” she revealed. “It’s really hard to believe that we’re at the end. I’m just so proud of everyone up here… and to all of you. Obviously, without you, we wouldn’t have made it this far.”

The Season 6 finale of Marvel’s Agents of S.H.I.E.L.D. airs on August 2nd, 2019. The series returns next year for its final season.