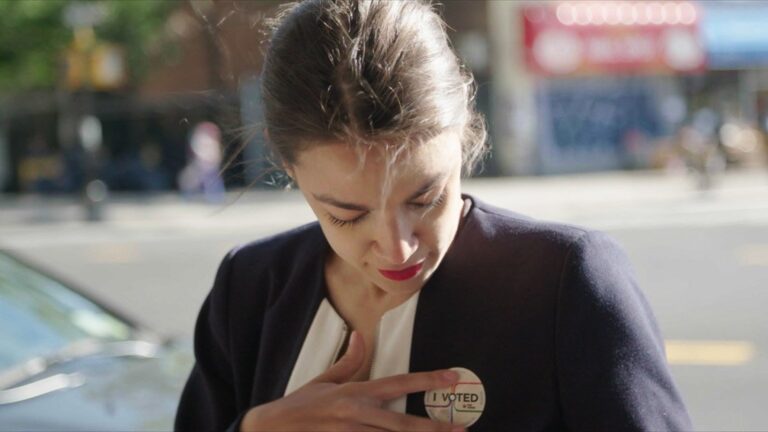 As Day Two of my Sundance adventure started off, promptly at nine in the a.m., I’m not sure I could have predicted the variety my four selections for the day were about to provide. Park City also graced me with warmer weather and a little bit of sunshine, which made making trips from the Prospector Square Theater to the Eccles Center, and then over to the Park Avenue Theatre far more tolerable. However, my list of films slated for the day would have made the trek in freezing cold weather just as worth it, as things started off in a powerful way.

I’m usually not the biggest fan of documentaries, but political doc Knock Down The House worked in all the right places. The story followed four working class women: Cori Bush, Amy Villela, Paula Jean Swearengin and Alexandria Ocasio-Cortez, as they work to get on the ballot for the Democratic primaries in 2018. Each woman has their own personal motivation for trying to overthrow the incumbents, which is told beautifully by director Rachel Lears. While Ocasio-Cortez was the only one to be successful, the film instills hope and encouragement that there are real people in the Democratic Party looking to make real change in how the system works. In a political landscape dominated by the idiocy of President Trump, this is a must-see documentary for those wanting to see how grassroots efforts can stoke the embers of real change.

Pete Davidson is charismatic, hilarious, and sincere as Zeke in Big Time Adolescence. This dramedy centers on the relationship between twentysomething loser Zeke and his teenage best friend Mo (Griffin Gluck). It adheres closely to most of the tropes of the “coming-of-age” genre, but it’s the chemistry between Davidson and Gluck that constantly makes each scene fresh. The characters are so relatable that nearly everyone can probably think of a Zeke from their high school experiences, and probably even a Mo, too. Jon Cryer also turns in a great performance as Mo’s father. Big Time Adolescence is ninety minutes of great acting mixed with great writing and an absolutely wonderful watch.

Last year at Sundance, Blindspotting was a racially charged revelation that left an impression lasting well beyond the end of the festival. This year that honor goes to Luce, a powerful look at the social and political implications when a white family adopts and raises a young black child from war-torn Eritrea. Tim Roth and Naomi Watts play Luce’s adopted parents, with Kelvin Harrison playing the lead. Luce is the top of his class, the star track athlete, leader of the debate club, but is he also responsible for less than reputable actions? Are these choices related to his traumatic past? What about his stern, overly involved history teacher (Octavia Spencer) — is she responsible for these questions, or just another victim? Brilliantly told with multiple points of view, leaving the audience to questioning whether or not some of the events actually happened, this film forces us to look at so many different dynamics surrounding race and expectations in and out of the classroom. Simply put, Luce is required viewing in these divided times.

My day finally came to a close with the Blumhouse horror mystery Sweetheart. Jenn (Kiersey Clemons) finds herself washed up on the shore of a deserted island where she quickly begins to realize that she might not be as alone as she first thought. Director JD Dillard makes masterful use of sound and shadow to create an intense feeling of terror and isolation. As Jenn starts to realize there’s something out there in the water that feeds off those on the island, another twist enters at the end of the second act which unfortunately derails the film. Sweetheart has a great premise and a solid first half, but unfortunately loses steam before rallying back for a decent finale.

Another late Park City night ended with having seen an inspiring documentary, a just-miss horror film, a strong tale of growing up, and a powerful look at the complications of being a parent in the face of racial divide. But none of these things could prepare me for the disturbing slate of films the final day would offer.