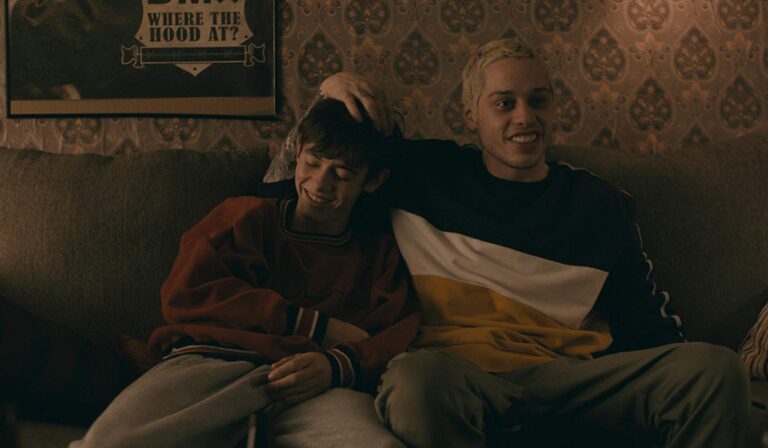 Many of us can recall someone older (and allegedly wiser) telling us that our teenage years would be the best of our lives, and that nothing we do in the future will ever measure up to the fun we had in high school. Of course, that nugget of wisdom is predicated on the idea that high school was ever actually fun to begin with, which isn’t always the case.

But for some people, high school truly is the pinnacle of their existence, and they spend the ensuing years trying to recapture that magic. Such is the case with Zeke (Pete Davidson), a tattooed twenty-something stoner whose best friend is his ex-girlfriend’s 16-year-old brother, Mo (American Vandal‘s Griffin Gluck). Zeke’s ex may have long since grown tired of his buffoonery, but as far as Mo is concerned, there’s nothing better than playing video games and getting stoned with Zeke and his pals.

When Mo gets invited to a senior party under the condition that he use his connections with the older crowd to supply alcohol, Zeke has a better idea: why not sell drugs to the kids and split the profits? Reluctant at first to garner a reputation as the “party supplier,” Mo quickly sparks to the idea when he starts getting congratulatory high-fives from the seniors — not to mention catching the attention of girls for the first time. But as he tests the waters with a newfound love interest (Oona Laurence), Mo’s penchant for relying on Zeke’s terrible advice (“show her a lot of attention for a few weeks, then ignore her”) and refusal to heed the warnings of his father (Jon Cryer) threaten to wreak havoc on his life.

Big Time Adolescence follows a fairly typical coming-of-age template, but is strengthened by a pair of very strong lead performances from Gluck and Davidson, the latter of whom immediately cements himself as a leading man with this surprisingly complex role. Zeke’s wise-cracking demeanor and “fuck it all” attitude mask a litany of insecurities that writer-director Jason Orley doesn’t shy away from. Most films of this ilk wouldn’t be able to resist the temptation to turn Zeke into a caricature, but Orley does a remarkable job making us care about this lovable layabout.

Showcasing range well beyond his work in American Vandal, Gluck navigates the triumphs and tragedies of being a teenager with a sense of poise and authenticity. Audiences will cringe at some of Mo’s terrible decisions, but won’t hold those choices against him because they’ll no doubt be reminded of their own youthful indiscretions — which were probably more disastrous and less humorous than depicted here.