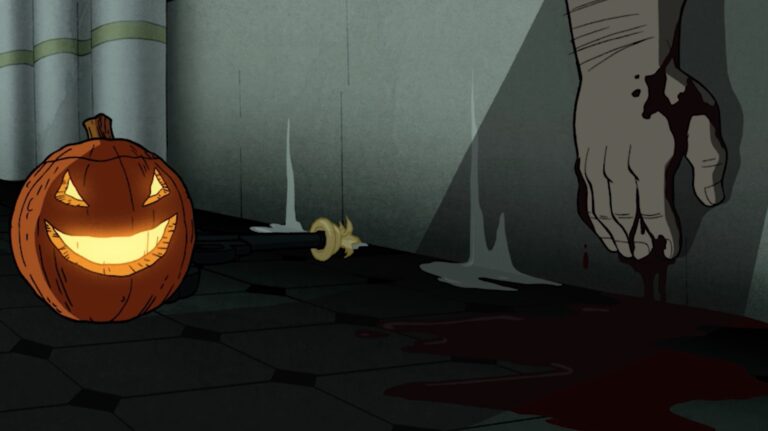 The nation may be amid an unprecedented heatwave, but Warner Bros Animation is going to transport you to the chills of Autumn with their adaptation of the beloved graphic novel in Batman: The Long Halloween, Part One. Boasting the new, slick animation style of the post-Justice League Dark: Apokolips War continuity and a heap of newcomer voice actors to the DC Animated Universe, this first part of the adaptation should please source material fans and new viewers alike.

Following a grisly murder on Halloween, Batman (Jensen Ackles) is hunting for the Holiday Killer with the help of Commissioner Gordon (Billy Burke) and hot shot DA Harvey Dent (Josh Duhamel). Part One then sweeps the audience through the major holidays of the late year, seeing Batman tangled in a mystery that has him bounding rooftops after Catwoman (Naya Rivera), investigating Carmine Falcone (Titus Welliver) in the middle of a mob war and even going viciously toe-to-toe with his arch-nemesis The Joker (Troy Baker).

Batman: The Long Halloween, Part One suffers a bit from retreading familiar ground popularized by the source material, namely yet again revisiting Two-Face’s origin. The tragic plot has been portrayed beautifully both on the big screen and in the animated realm and this adaptation adds very little new, due to simply translating the story that started it all. Duhamel makes an excellent Harvey Dent though, so hopefully Part Two gives him more chances to shine now that the origin is out of the way.

Jensen Ackles (Supernatural) gets his turn to be the voice under the cowl after previously playing Jason Todd in the fan favorite animated adaptation of Batman: Under the Red Hood. Ackles does a solid job as the Caped Crusader, and although he has some trouble differentiating his Bruce Wayne and Batman voices, he does manage to bring a welcome Kevin Conroy vibe when his Batman finally gets angry.

The most interesting parts of the film revolve around the mob elements, and Welliver is great as Carmine Falcone. His fractured, toxic relationship with Alberto Falcone (The Boys‘ Jack Quaid) provides a violent and dark backbone to the growing mystery of the Holiday Killer in Part One.

A fun upside to the film has Batman’s investigation leading him to many interesting members of his rogue’s gallery including some brilliant scenes with Calendar Man (David Dastmalchian) and Solomon Grundy (Fred Tatasciore) to name a few. But of course, it all culminates with a large scale battle above the citizens of Gotham between The Dark Knight and The Joker — yet another element that feels very “been there, done that” for these characters. Baker is yet again doing his best Mark Hamill impression of The Joker, but he’s fantastic at it and it’s hard not to like that voice for any animated version of the character.

Batman: The Long Halloween, Part One looks terrific and has a refreshingly new voice cast in place that helps offset the parts of the film that feel overdone and too familiar. The holiday settings add an extra fun layer to the storytelling that might make Part One a seasonal favorite for some Bat fans.

Aside from the film, the Blu-Ray release also includes the normal format for special features with the biggest draw this time being the animated short DC Showcase: The Losers. Based on the obscure DC Comics team of WWII soldiers stranded on a remote island in the South Pacific overrun by dinosaurs, the short is a bloody blast and is just as weird and outstanding as it sounds.

On the more predictable side, the special features also include two From the DC Vault episodes, both pulled from Batman: The Animated Series. The first, Christmas With The Joker, is included for obvious holiday reasons and happens to be one of my personal all-time seasonal favorites, while the second (most likely added for its mob-themed story) is It’s Never Too Late. Rounding things out in this small, but still entertaining grouping of supplementary features is the preview of the next animated film, which is obviously Batman: The Long Halloween, Part Two. The feature gives a look at some animatics of the back half of the story, along with interviews with the cast and creative teams.